A sad day in my home country

So yesterday was a pretty normal thursday in Latvia. Untill about 6pm when one of the most popular supermarket's roof collapsed on top of hundreds of people. After the accident happened, when the fireman arrived and tryed to reach the people under the collapsed roof, the rest of it came down.

A lot of people have lost their lives. Men, women, children, firemen. As of now, 32 people have died including 3 firemen. They are still trying to dig out people after 17 hours. A sad sad day.

(edit): Already 51 people have been confirmed dead. This is the worst tragedy in Latvia since our independence. 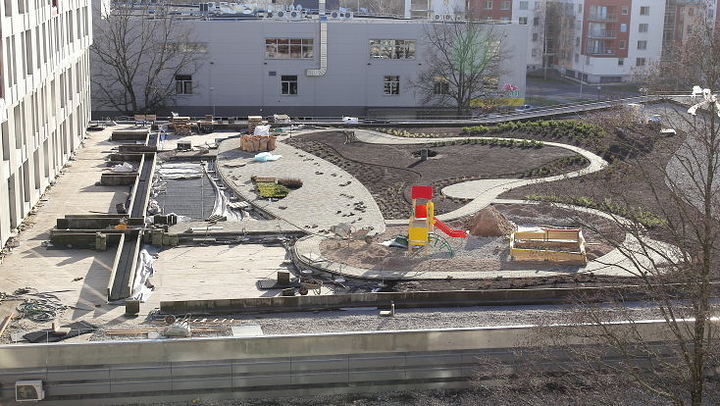 Before the first rescue team arrived. I'm so sorry my friend. May the ones that had died rest in peace. My best wishes for a speedy recovery for those who survive

Usually from incidents like these regs get tighter and things get better, well unless you live in india

Such a shame that stuff like this has to happen, although its purely accidental the people inside should not have to deal with stuff like this, I'm sure everyone on here gives their wishes for those families and friends affected

looks to me like the supporting beams failed. perhaps the builder took shortcuts....

45 confirmed dead. Investigation is in the progress and the reason is yet unknown.

The interesting thing is, that the building was less than 3 years old.

people are still being dug out so that horrifying number may increase.

they were building some kind of a garten/kids playground on top of the store. not sure if that was the reason but it could be. the church bells are ringing and cadles placed all over the country. man that is so so depressing... I mean, there are only about 2 million Latvians in total and then this...

even the Pope is praying.

Events like this can happen anywhere, not just in countries with looser regulations.

Usually it's miscommunication because even the person who wants to cut corners for quick profits doesn't want to hurt anybody, not if they know.

It happens when say the engineer designing the beam to column connections in the steel structure specified some m16 bolts in one place and m20 bolts in another. Sounds fine right, it's specified?

Well when the washers are on they look  the exact same and will pass visual inspection. If on site the contractor either mixes them up or doesn't want to find another few M20s when he has a handful of left over M16s and throws them in when a couple of M20s should be. It stands up, leave, job done.

No one will know until something like this happens.

A similar event occured in Switerland or Austria about 6 years ago I beleive. It was a swimming pool that collapsed under the weight of the snow loading on the roof. All because the contractor made changes to the plan where the designer had specified something that wasn't as straight forward as normal.

The investigation will be very illuminating and I can tell you right now there is at least one person, if not many, who are responible if only through professional incompetance.

By the way I am a final year civil engineer and literally every course I have done on structures, structural analysis, steel design, concrete design, etc. have all began with a half hour talk on what happens when we get it wrong and how so we can avoid it.


The pictures above will be in lecture slides all over the world for years to come.

Edit: Looking at the image it seems that the bolted connections failed on the central trusses of the roof. If I had to say why I would guess that the roof was not designed to take the loadings of the soil and path material you can see. It looks like it was added more recently by the look of materials on the edges.


There is also some geotextile layers underneath but not much in the way of drainage pipes so the amount of water in that material could have been significant.
Many extra tonnes of loading on the roof all transfered to those bolts in the froce of shear force and bending moment. Not good.

Oh christ, yeah, those pictures tell basically the whole story. I mean when the forensic engineering report come out you'll see what the real and fully explained reason was but my guess is about there I think (then again I would think that).

Someone got the idea to use the roof space more intelligently for something nice. Problem being they didn't do their homework...now people are dead.

I mean just look at all the stuff they were piling on top that roof. I mean imagine how much weighs or the weight of the machines/men they had working up there fatiguing the structure.


That roof was probably designed to hold snow, rain and a few ventilation/refrigeration units. That's it.

Man this is horrible. Just to let you know the Irish news media is telling people about this are there is a lot of sympathy about it here.