A Question for Sennheiser HD 558 User from a Noobie

So, I found a great deal on the Sennheiser 558s (60 USD), and am going to be using the mod mic for gaming/voip/conferencing.

My only real question is (Although not at this time, as my budget is currently maxed out) this: Would it be worthwhile investing in an amp for these? Say, the FiiO E11K. I'm a poo-babby scrub with audiophile gear and am just now getting my feet wet.. I'm sure the 558s will do great on their own; however, I'm just curious as to what one would be looking for in adding an amp. Obviously, they would be louder, but to what degree? How would this affect quality? Is it even necessary at all?

My only previous experience with any kind of "audiophile" equipment is home theater setups (Currently running a Pioneer VSX-522 with Bose Acoustimass 5.1 speakers...Loving it, and made me realize how meh my now-broken Logitech gaming headset is in terms of sound quality. :P), and I'm always looking to learn! Any tips, ideas, etc. are completely welcome. Thanks, guys.

If you like the way it sounds, then just be happy with it. However, for a newby, I would recommend getting a dac/amp combo and just be done with it. The SMSL sApII or the Fiio E10k are good start set ups if you are interested though.

Headphones came in yesterday. I'm extremely happy with them so far! After watching the first video in the "audiophile myths" series this morning, I decided to unplug the 558's from my sound card and plug them straight into the onboard audio. Sure enough, even with the front audio on my case, they sound SIGNIFICANTLY better.

Sound card to 558's = Slightly louder, but lots of grainy background fuzz at high volumes.
On board and front audio = Slightly quiter (and I'm talking by, like, a few db max), with no background noise at all even maxed out.

It took me a little while to get used to the less bass-y sound of these compared to, say, my old gaming headset (Logitech G430); however, once that set in I actually much prefer the bass mixed with the significantly higher quality of the mids. In short, I'm a happy camper (CS:GO pun not intended...).

Question for anyone using the mod mic with a pair of headphones like these: What in the hell do you guys do with that extra cable? I thought about using the clips to the 558's, but that kind of kills any portability for the stock cable (who wants to mess with all kinds of cable foolery just to unplug your cans and go to wherever?).. I am waiting on a second cable to arrive, but I'm curious nonetheless!

What sound card and what mobo are you using?

I've seen people wrap it around the cable of the headphones or zip tie it to it.

It took me a little while to get used to the less bass-y sound of these compared to, say, my old gaming headset (Logitech G430)

Yeah, straight from the source the 558s will lack a bit of low end. Amping them will bring it out though. But, like 1920 said, if you're happy with the way they sound now, then don't worry about an amp/dac.

Question for anyone using the mod mic with a pair of headphones like these: What in the hell do you guys do with that extra cable?

People zip tie them, braid them, sleeve them, pretty much anything you can think of. Here's some photos to give you an idea: 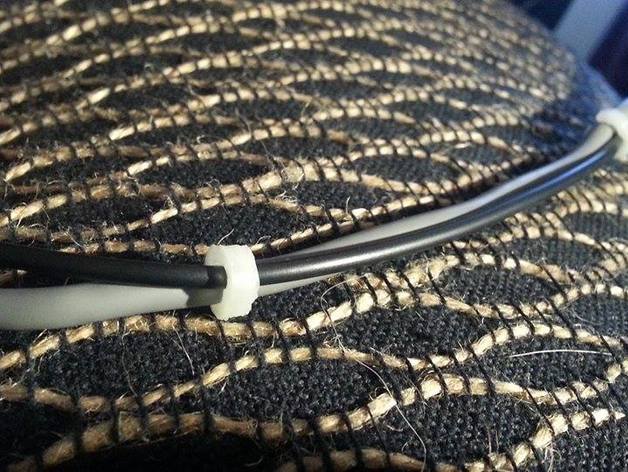 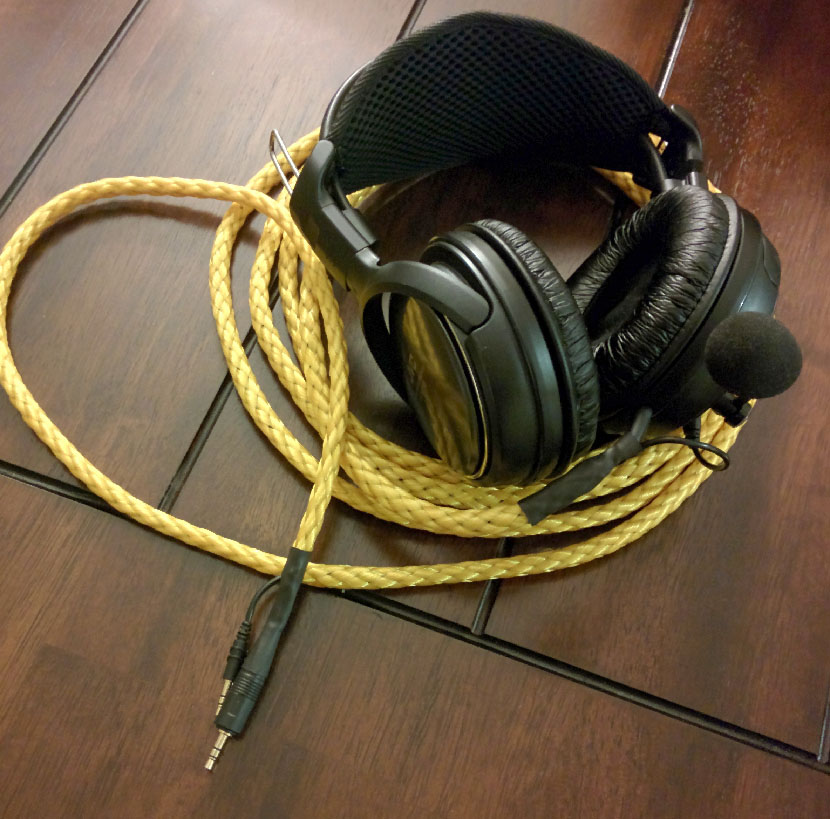 Okay, that's pretty dope. So the obvious answer for portability has become, of course, buy a second cord, because that just looks too badass not to attempt myself...

As of now I'm trying to figure out what in the hell that last one is, 'cause it's pretty rad.

Looks like braided nylon sheathing to me. This should be an easy way to get something similar.

It's actually nylon rope that the guy just fed the cables through. Probably 1/4" (head to a hardware store and see what they have). He just found something that would separate enough to feed cables through when you pinch it together. Then taped and shrink wrapped the ends. But, if you want an easier time of it, standard nylon cable sleeving will get you a similar look. Only with smaller braids.

I actually don't mind a tighter weave considering the rad patterns you can get. I am new to this whole sleeving thing outside of heat shrinking.. I'm trying to determine the best size in diameter to get for use in sleeving both my 558 cable and modmic cable together. I'm not finding many concrete details on cable diameter, though so I'm having to eyeball it atm. Thoughts on using something along these lines?http://www.moddiy.com/products/Deluxe-High-Density-Weave-Black%7B47%7DBlue-Cable-Sleeve-%284mm%29.html

EDIT: It would seem 10mm might be the size to go with.

6mm (1/4") expandable is probably what you want. You want it to be just big enough to fit the connectors through. 10mm will probably be a bit loose. 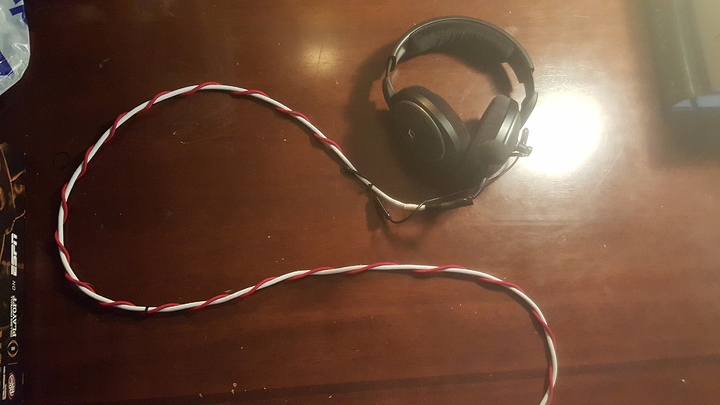 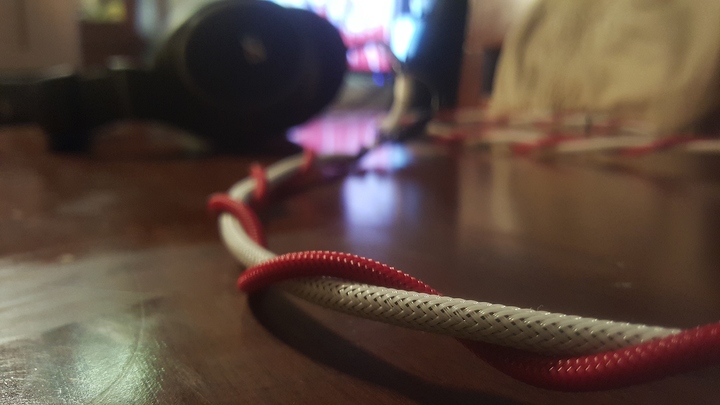 Aaaaannndd it's done! I decided to go with separate sleeving just to keep the cables independent should I ever need to change anything...And I can make them look like a candy cane.

I also went with 4mm sleeving for the 558s and 2mm for the mic respectively. I cut the ends and re-soldered (after wrestling the the mic for a while..Ugh.). Everything's up and sounding as good as new.

What in the hell do you guys do with that extra cable?

Personally, I recommend that you do not. Grab a Samson Meteorite or Blue Snowflake and damn the modmic and it's cables. If your PC has Bluetooth, you can grab a Mpow Streambot and make wireless headphones that sound awesome (the Streambot is even able to push HD600s according to ZeosPantera).

Personally, I recommend that you do not. Grab a Samson Meteorite or Blue Snowflake and damn the modmic and it's cables. If your PC has Bluetooth, you can grab a Mpow Streambot and make wireless headphones that sound awesome (the Streambot is even able to push HD600s according to ZeosPantera).

You do know he already has the modmic, right? He posted the finished product right above your reply lol.

Aaaaannndd it's done! I decided to go with separate sleeving just to keep the cables independent should I ever need to change anything...And I can make them look like a candy cane.

Looks great man. Glad you got everything sorted the way you like : )

Derp, was on my phone. Holy crap do I feel stupid.

Thanks, Whiskey! I appreciate ya'lls d00ds help in making some of the choices along the way. ...Might have to build/buy a few more cables for the 558's just to sleeve 'em in different colors because I have altitus something awful.

Jniac, I actually agree for anything other than just chilling on Skype and playing vidya. Bluetooth I'd rather avoid in general, but I usually recommend the Meteorite or Snowflake for any kind of streaming, podcasting, or basic content creation. On Skype and gaming, however, I prefer something like the unidirectional modmic simply because it's easy, it's right there, and it's (at least my choice of model) unidirectional.

Also, don't sweat the derp. I've made much much worse!

Here's a picture from the other day after I cleaned them up 'cause I moved and got nasties all over the pads. http://i.imgur.com/JnQzdFc.jpg