7870 Vulkan driver that would work?

So. Has anyone got any clue that is there a driver for 7870 that has Vulkan working and does not crash ?

I have not yet found one. If someone has a working system with this 7870 please inform that how you got it working.

What OS are you using?

All three OSes have different drivers and troubleshooting that also may depend on which version you are using.

They have a linux tag, so we just need their distro.

Yup. Linux. Have tried both Manjaro and Ubuntu MATE.
Have tried with Padoka PPA and Oibaf PPA.
I have also tried Windows. There everything works.

Even with Linux i can run Furmark and some other stuff no problem, but games be native or WINE always crash after a while.

Have tried with stock and with AMDGPU-PRO.
I can play a game for a while, but then it crashes the whole system.

I can try Antergos, but what would be the exact way to install the driver there?

Ubuntu MATE would be the distro of my choice if hardware would just work there.

I will try Antergos with AMDGPU + vulkan-radeon. Did you not have to put in the kernel parameters radeon.si_support=0 amdgpu.si_support=1 to make Vulkan work with your gpu?

As your gpu is Pitcairn and so is mine, i think those require it???

Yeah i had to do that. I didn’t blacklist radeon coz i didn’t even install it

I installed xf86-video-amdgpu and vulkan-radeon. I get Doom2016 own error message. So not working. Quake worked fine though.

I will try some native stuff like ROTTR and some OpenGL stuff to see if the driver is completely broken. 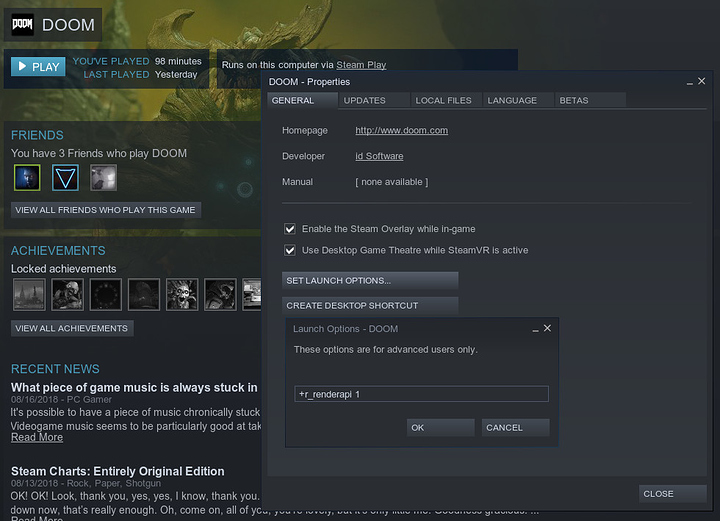 Now i did. Doom 2016 was full of graphical glitches and crashed after a while. ROTTR ran for a while but then crash. Unigine Valley crash. I will try to do a underclocked bios mod still if it works. In Windows this works 100% though.

Thank you for your help.

Ouch. Sorry to hear that about glitches. My GPU is actually defective a bit and has some glitches and artefacts, but it;s much better on Linux with AMDGPU drivers (it’s very rate to encounter them here) then on Win7 (almost always get the artefacts)

NP. Again sorry to hear it’s not working out.