Hey guys, I'm looking into building a computer and I was looking at building a Mostly gaming machine and I'm having a hard time deciding which to get

the only difference in the build would be the motherboard everything else will cost about the same.

Wow I guess that means you can sit down too. I like the 8350 and have one but calm down, I5's are great too.

You're obviously right. Not to mention that the AMD boards are cheaper.

Well I'm going to overclocking what ever CPU/APU I get to 4.5ghz... would that change anything between a 8350, i5?

Then I would go with the 8350. It's stupid easy to overclock. 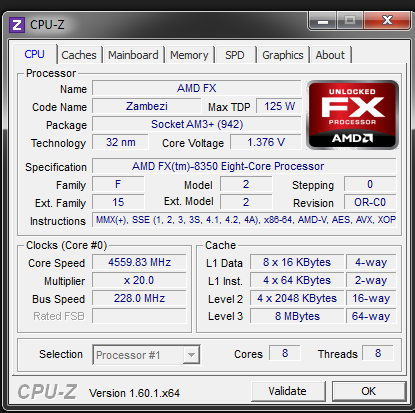 The i5-3570k should also overclock well and it does have better single threaded performance. However, the only games that benefit from this are Total War Rome 2 and Shogun 2. They really like intel CPUs.

Also a thing to take into consideration is that CryEngine and the Frostbite engine will surely use the 8 threads from the 8350. And a lot of games are being made in those two: Dragon Age 3, New Mass Effect on Frostbite, and Star Citizen on the CryEngine.

For example, you can't fit a large fan on it - it will cover one of the RAM slots. Also, there is only one CPU cooler connector, so you'll need a spliter. The BIOS is old-school. The rev 1.0 doesn't have LLC.

But, if you have a water-cooler or don't use all 4 slots for RAM, and get a rev 1.1 or higher, it's a really good board. And I mean really good.

You should ask around more if you're not in a rush. Don't base your decision just on what I've said.

Also, be aware that you WILL be bottlenecked by your 6670. At some point, you will have to upgrade.

Okay, thanks... I don't really have a steady income (i'm a Student) this computer is going to last me a good year or 2.

Where in canada are you located? There are some microcenters in western canada.

Also, when looking be sure to view NCIX.ca and newegg.ca. Amazon.ca hardly has anything cheaper than the two in terms of pc parts.

I know you didn't ask for it specifically but if you are considering FM2+ I would strongly recommend the Athlon II X4 750k processor in you have the dedicated GPU, but that would make your buy radically different: the i5 would more of a mid-high end CPU while the Athlon would be an entry level-mid CPU.

I'd take the athlon over Kaveri because it's stupid cheap and you can most likely overclock it to 4.5+GHz. Also FM2+ motherboards with decent overclocking capabilities are hella cheap too: the ASrock extreme6+ costs around 70€ and it's an 8+2 phase MoBo. Otherwise, if you have some more money to spend, I would go AM3+ or if you dislike the FXs for some reason, i5