Apple just released the new iMac with a 5k display and some other pretty impressive specs. Not a bad deal for $2,499. It is unlike apple to be this competitive on prices.

The flagship 27" iMac form factor has been updated with a high-resolution, high-DPI screen, and it's now known as the "iMac with Retina Display." It run at a resolution of 5120x2880.

Is it a full i5 or a mobile? And does it have the same issues that all AIOs have with heat and upgradibilty?

Color me interested if I can get the monitor by itself. Apple displays are normally pretty good.

It says 3.5ghz i5 or 4.0ghz i7, so those must be desktop parts. I guess we won't know about heat issues until the reviews come out.

Am I the only who thinks these resolutions are getting ridiculous? Who needs a damn 5k display?!

They're getting pretty high, but I guess what really matters is ppi. If you're going to have "retina" ppi on a phone or tablet, why not on a desktop?

This is way over the top for gaming though, GPU technology just isn't there yet.

Well I knew the latest iMac i5 was a mobile part I believe it was a 4260U is the base iMac.  Although previous generations seem to have used desktop parts as do some of the 27" ones

It is using a mobile R9 chip though and the new ones are so slim idk how they would be able to get a desktop Haswell i5 in there. At least not without some serious thermal throttling.

I really wish Apple wasn't so secretive about this kind of thing. Like seriously. Don't just say i5 or i7. That means nothing.

I find the new Mac Minis more interesting though. Quite stylish. 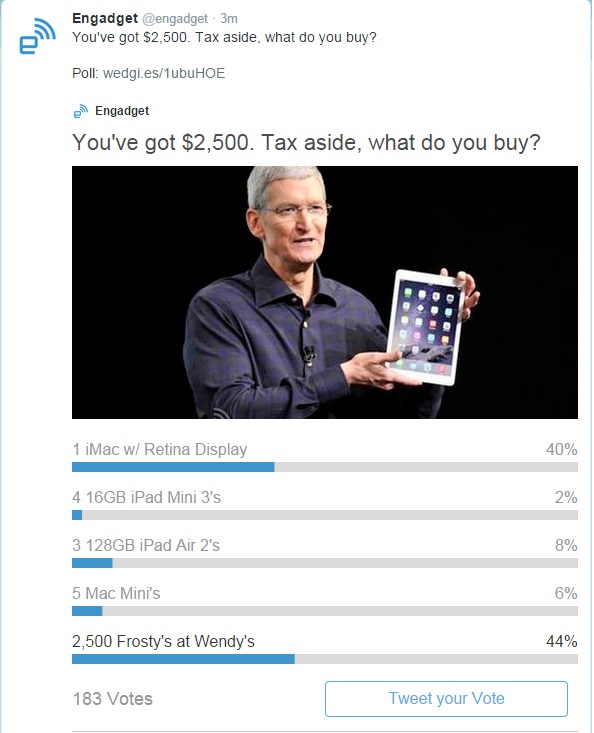 I really don't understand why Apple has to keep supplying the "Retina" display. It breaks so many things with scaling. If they really want to not break scaling, just use 1440p screens or better UltraWide.

it depends on how close you sit and the size of the screen. we're pretty much hitting the limit with large screen phones, but with very large monitors i can still see some use especially with photo/high res video editing.

For TVs 4k/UHD doesn't matter unless your screen is 85 inch plus and you have the content.

Yeah, I was also thinking about content, things are barely reaching 2k & 4k.

5k seems like a strange resolution... 4k is massive and its nice because you can the the monitor at 1080p for games and it still looks fine. Not sure about 5k though... maybe Wendell will mention something about this in the tek.

5K is a bit of a weird resolution. Especially their implementation of it. I know RED makes some 5K camera but I am pretty sure they shoot at 5120X2700.

Apple seems to have a thing for these strange resolutions. Really surprised they went with 1080p on the iPhone 6+...

Obviously not for gaming. Just driving a desktop is fine.

Really competitve price IMO for a full system and 5K display. Must say I am pretty impressed with what they have done as I was expecting a 4K display.

Their general price drops this time round are pretty cool.

Exactly.  And excuse me for not wanting to buy four graphics cards in quad-SLI to play games at a reasonable frame rate at these increasingly insane resolutions.

I really just want the display by itself.