A very interesting thing is that, if I remove any 1 of the 8 dimms, it successfully boots. Literally, with any combination of 7 dimms sticks and 7 dimm slots, it boots.

The followings have been tested so far:

Should I wait for a new bios? I’m seriously considering purchasing a new MB (other than the asus wrx80se-sage).

Please, any suggestions? Thanks!

Hello! I am having the same issue.

I get the same loop of MB codes. Removing 1 sticks enables the system to boot and run without errors.

Perhaps you got a 5995wx with a weak IO die? I wonder if you’d see the same results using register memory instead of LRdimms. Ironically, from my experience LRdimms stress the IMC more than just registered double ranked memory.

Thank you for the reply!
I’m currently using Rdimms. Anyway, it is interesting that LRdimms stress the memory controller more than normal Rdimms. This is good information for me.

You are having the same Q-Code loop with 5975wx and 1TB memory. Now I suspect that there is a bug in BIOS 1003 that prevents the 5000wx CPU from working with 1TB of memory.

ahh, I had assumed you were on LRdimms with such high dimm capacities.

Yes. Same exact error code as what you reported. I should also say that I’m running BIOS version 1003 as well.

I was also looking to see if anyone else was having this problem, but I couldn’t find. Thank you for responding!

Because I’m currently using the same MB + 1TB ram with 3995wx without this issue, I believe this occurs only when 59x5wx is used together.
Anyway, now that I’m convinced it’s a bios issue, I’ve sent an e-mail to ASUS to inquire. I’ll keep you updated as soon as I receive a response from them.

Yes, the most recent 1003 bios is about ten months old. I’m hoping ASUS will update the bios soon.

I’ve sent an e-mail to ASUS to inquire. I’ll keep you updated as soon as I receive a response from them.

Wonderful! Thank you for doing that. I’m eager to hear back.

In the meantime, I am thinking of exchanging my memory, I noticed that on the ASUS QVL they only list Samsung M393AAG40M3B-CYFCQ for 128GB sticks and I am currently running M386AAG40BM3-CWE.

Okay, count me in with the same issue! Here are my specs:

I tried several different combinations of memory slots and DIMMs to rule out any single point of failure - the behavior was the same every time. It seems like when the full 1 TB of RAM is filled up, something in the BIOS (or in the CPU memory controllers?) bugs out.

While changing the memory modules, I incidentally failed to push one of them completely down, and I saw what a real memory error looks like: yellow/amber diagnostic LED and Q-code C5 with no further activity and no boot.

Now I’m back to using 8x 64 GB Samsung M393A8G40AB2-CWEBY, which work absolutely fine in 8-channel mode. Really hoping to get a new BIOS from ASUS.

@wendell I know you like this motherboard, and I got excited by your video on it, but you may want to recalibrate your recommendation based on the fact that you can’t use 1TB of ram and have it “just work.”

My hunch is that it wouldn’t matter. Given that @trx80a had things working with 8x64G DIMMs, I’d lean towards some kind of BIOS bug. When the memory count needs to use bit 30, something croaks. That’s the highest bit in a 32-bit signed integer (since bit 31 would wrap around and be negative). I wouldn’t be surprised if some 32-bit legacy code in the BIOS memory check is using that bit as some kind of error flag, which causes the boot loop.

That’s all supposition about a BIOS bug, but given that there’s an example in this thread of all 8 DIMMs working, but not with 1024GB total, it seems like getting new memory isn’t likely to help.

its likely a bios bug, there was a bios bug around the nvme support as well… the contacts I had at asus are gone or don’t respond because, I guess, level1 is too fringe or whatever.

ironically the 3000 series cpu with 1tb and oldddd bios for this board does work I think. You may be able to change the address bitmask to get 1tb to work since the motherboard tries to put stuff in memory mapped io at the 1tb border and this bug smells like that’s what its doing. tbh surprised asus support hasn’t emailed you a bios with the fix? 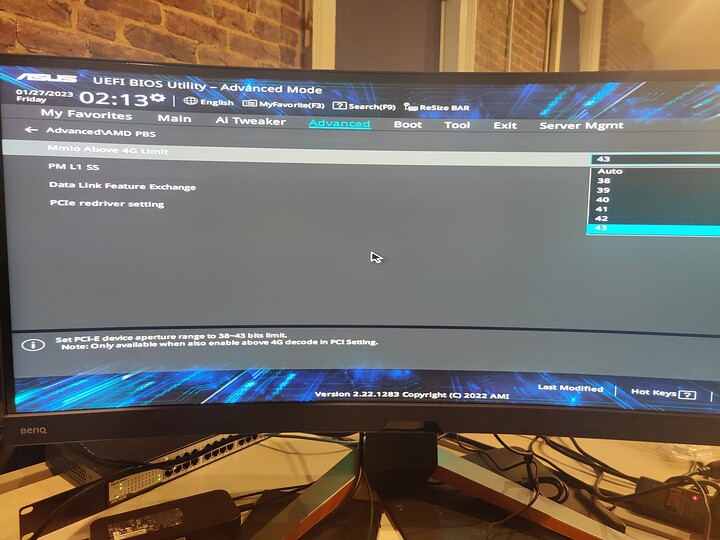 I went ahead and ordered 8x of Samsung M393AAG40M3B-CYFCQ. Unfortunately I get the same error codes.

I spent some time today talking with a supervisor (for whatever that’s worth) at Asus and I submitted a bug report to their technical team. I’ll report their reply as soon as I receive it.

It’s too bad that new modules in QVL don’t work as well.

When I tried to contact the ASUS tech team via the website, I was asked to enter the serial numbers of the MB, and my report was routed to the distributor rather than ASUS (I live in South Korea). The distributor in my country said that they must conduct an internal test to see if the same error occurs, and then report the results to the ASUS technical team. Although I understand their policy, it is clearly inefficient. I asked if I could get the tech team’s e-mail address so that I could contact them directly, but they refused. They simply said that they WILL conduct the test and that it will take some time.

Thank you for reporting to ASUS, leaving comments, and sharing the test results. I’m hoping to hear back from ASUS and they will out new bios soon.

Thank you for your feedback! Ironically, I’m relieved to see another guy who is experiencing the same error. I hope ASUS recognizes this problem soon.

In terms of memory read speed with 6 or 7 modules, I ran a test using COMSOL Multiphysics. The test consisted of solving electrodynamics problems for two different scenarios, and the results were frustrating. Thank you so much for informing me of this important fact. I really appreciate it!

I was shocked by this result and immediately went back to 8 x 32GB although this strongly limits the computation capacity.