I’ve recently switched from a 3950x to a 5900x for my do-all-be-everything PC and noticed something weird after “tuning” PBO2 with the curve optimizer: CCD1 has lower idle and load temperatures than CCD2, sometimes as high as 9c. I’ve repasted, changed coolers, reset the bios on my x570 Aorus Master, and even tried the 5900x on two different boards - a b550m Tuf and a b550 Aorus Pro - but the temp delta persists.

I swapped back to my 3950x and did some stress tests and let it go long idle on both coolers I have (Noctua D15 / Arctic LF2 360) - it didn’t exhibit the same temp difference between CCDs. Is this inherent to Zen3, or just my chip? Anyone else notice this on their systems? 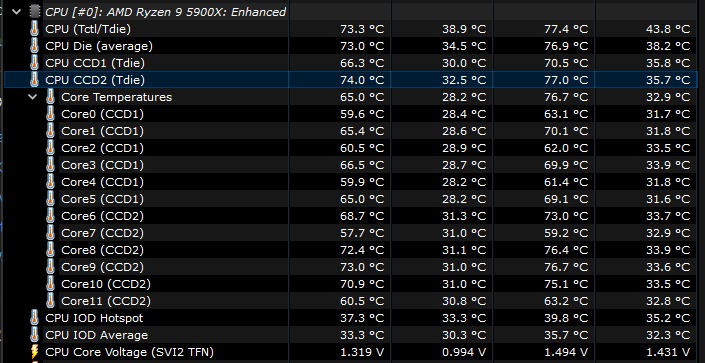 This might not be that helpful, but I’ve seen similar temp deltas between CPUs of the same architecture, same number of cores, and same voltage and clockspeed settings on AM3, and my 4690k also had a temperature delta of close to 10c core to core.
I suspect that the sensors themselves that are used simply aren’t calibrated to within 10c. It’s probably just a matter of “the sensor is within x or higher of the actual temperature”, since that’s what matters most for safety.

That is pretty normal. I have a arctic liquid freezer II 360 and 5900X and my temp delta is 7C on AVG. 71C CCD1 and 78C on CCD2. Typically 1 CCD is usually higher binned than the 2nd thus the temp difference.

My 5900x this winter has about a 5 degree Celsius gap between CCD1 and CCD2 when doing some heavy lifting, CCD2 will just have the higher temperatures. When I max out the two intake fans and run the Arctic Liquid Freezer 2 (280) at max they even out with a current temperature according to Open Hardware Monitor of around 1c between them.

What I have noticed is that CCD1 always has the highest boost clocks. Its exactly what Jason_Handley said, CCD1 is the better binned chiplet able to sustain higher boost clocks and still come in at the right power target. CCD2 seems to use more power and create more heat.