5 and 6 Degrees Of Freedom..modern takes on Descent

Id pioneered the idea of developing a game engine then seeling it to developers for 50K. They used to call it a 50K xcopy.
The Doom game engine unleashed a torrent of creativity that was amazing.
One game that blew away the makers of Doom was Descent.
Descent pioneered the genre known as 6DOF.

Fast forward to today, processors have gone from 1.3 million transistors to billions.
Graphics and physics are insanely realistic, and most games have lost that "theater of the mind" where your imagination was part of the gaming experience.
6DOF is now a genre in steam. Descent Underground and Overload are in early development. Everspace seems interesting. Anyway I have bought Descent Underground and downloaded Overload's playable demo. I find myself playing these while Battlefront, BF4 and Crysis3 are on my HD and rarely used.
Anyone else a fan?

Am i rightside up.? Does it even matter ? Descent Fan

Live a little ? People pay good money for that. As soon as you train your brain not too care, it is not so bad. What i want is good physics where you go tumbling and spinning off in some direction after being hit. :)~

One difference between Overload and Descent Underground is Overload has way better physics. Fire a missle too close you get rocked back, no tumbling however.
Overload also tell you in the hud if you are sideways for more then a few minutes.
Descent will die without a major update, I wounder if the small independent team just ran out of cash.
Overload team has allot more backing (ie cash) and it really shows in the graphics and physics, kinda cool seeing a shadow of your ship moving along the cave wall.

I still have Descent installed on my rig. That game blew my mind back in the day.

Pandered to multiplayer and did not actually build a single player game. Last i looked. So ? ya ! Doomed to be a flash in the pan.

lol, thought this was gonna be a thread on the 6DoF motion platforms. I want to build one of those so bad.

is a Kickstarter / Steam Greenlight / Just released on 6/1/2017 $20 arcade racer from the friendly folks that made Wipeout. 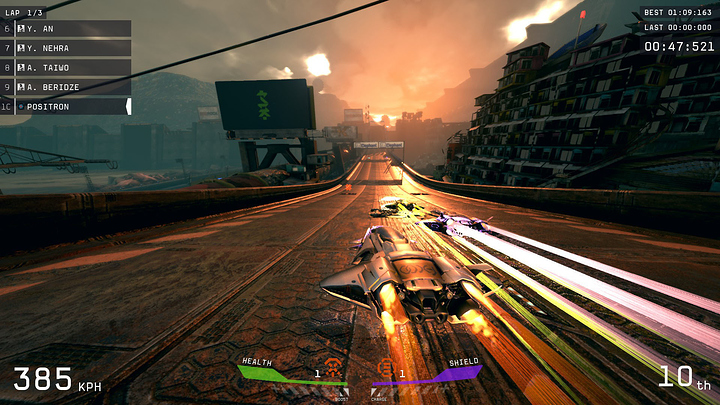 I bought it a few hours ago.

You fly a 400 KPH anti-grav rocket racer centimeters off of the ground. You get turbo, shield, missiles, mines, more? Usually when you run over a power up some gets applied immediately and the rest goes into your battery. This UE4 games nails the FEEL of speed and it's easy but challenging. I am a good racer but inconsistent. I do well for a while but I keep touching the walls and falling back. Battling the other racers in the pack is awesome when I can keep up.

Negatives:
* The menus are a twitchy pain to navigate.
* Nobody is playing multiplayer yet.

edit:
This is the best quality video by an informed reviewer with a really annoying voice on my favorite track.
No, it's not Linus.

I can only play once per Windows session. If I exit, I have to reboot to play again. I reported the bug to tech support.

Also, I INSTANTLY thought of the old P.O.D. racing game! So much influence of it here!

I asked @anon85933304 and he said it was Okay to post here because Formula Fusion has 5DOF but you mostly use just one - FASTER.

Lemme count. forward/back, pitch, roll, yaw, that's 4DOF. Up / Down is handled automatically by the Anti-Grav unit. Do we need to start a 4.5DOF thread?
/s

I am finding that using L & R handbrake (yaw+brake) is a quicker way around some corners. Using pitch in a corner is possible but I'm not there yet.

I like the intense strategy of managing shield, health,ammo, incoming fire and having to change the racing line to get the power up. The developer was quite diabolical how they placed them in risky locations.