4k 43inch monitor reccomendations (Edit: Ended up getting a 49")

I have been looking to buy a 4k 40+ inch monitor for a while now (over a year), I was hoping for some innovation, but it looks like its gonna be some time before we get any at lower prices. Anyways I would like to have some reccomendations for potential candidates with a maximum price of 700$. Currently I have two “monitors” in mind:

Currently I am using a Dell U2414H (which I will then turn in portrait next to the new monitor) and a Dell 21’ which is gonna be retired.

I know that the two monitors I have listed are VERY different. But the TLC is one of the best choices for cheap and good monitors (but its VA). The LG on the other hand is the BEST 4k 40+ inch monitor that exists today (and its IPS). I am mostly doing productivity and media consumption, but occasionally I will play games. I am not looking for TN like response just something that won’t drive me crazy.

My main concern is if the LG would be worth the more than double the price. I am not interested in the KVM and multidisplay capabilities, though the USB ports are a nice touch.

L1T has loads of videos on cheap korean monitors. Search the channel and ebay for “wasabi mango” or “crossover”.

Edit: I highly doubt the TCL one has full chroma, which is kind of a must for using it as a monitor.

I have done a bunch of research on monitors in this size class. Unfortunately the available options in this size / resolution class are not very good.

The two monitors you posted are not great options, for a number of reasons.

Right now, your only decent option is the Dell P4317Q. Looks like there is a used one on Amazon for around $750. The next model down, the Wasabit Mango UHD430, has enormous input lag. Both of these panels also have a BGR subpixel layout, which is non-ideal for OS’s other than Windows and also some programs as well (I think Google Chrome may be one, can’t recall right now).

There were a few okay models using VA panels around 40", but those appear to all be gone now.

The only large monitor that I can really sign off on right now is the XR382CQK, but it is very expensive. There are a few other models that use this same panel too but they aren’t cheaper.

LMK if you have any questions about this.

I am mostly doing productivity and media consumption, but occasionally I will play games.

Exactly my use case. I use Vizio 50" 4K, three of them. They are excellent for productivity and I have zero issues gaming on them. I do not compete professionally in first person shooters so YMMV. The Vizio is rated slightly higher than the TLC you mention, and I mean slightly, but TLC has a better response time slightly. I drop mine out of 4x4x4 Chroma for gaming which drops response time down to 16.7ms at 4K 60Hz. The TLC can do 14.9ms response time with 4x4x4 chroma enabled. Is that fast enough for you? Remember there is a 1000ms in a second and you take at least 50ms to see and respond.

Considering you listed productivity before gaming and you do not list professional video or image editing, I would assume the TLC would be fine for you. I would go for 50" though as it equals 4 24" monitors for productivity.

Thanks a lot @Raziel Your reply was exactly what I was looking for. Can you please tell me the model of your “monitor” ? Also I am assuming it is a VA panel. Do you have any problems with viewing angles? How far away from the monitors do you usually sit?

About the Dell, I have seen that it is inferior to the LG monitor, since the LG is using a newer panel which is supposed to be greatly improved. Personally I am a huge fanboy of IPS, but from the review that I have seen, the TCL is a pretty good case for VA panel, even though it is very cheap.

I don’t know why I keep saying TLC when it is TCL … guess it rolls off the keyboard better.

No trouble with viewing angle, but I am up close and personal, 3.5’ away in surround. It is good for a VA panel.

Here is the new home I built for them, they are covered now because my new PC is waiting on a replacement part. That way proof. 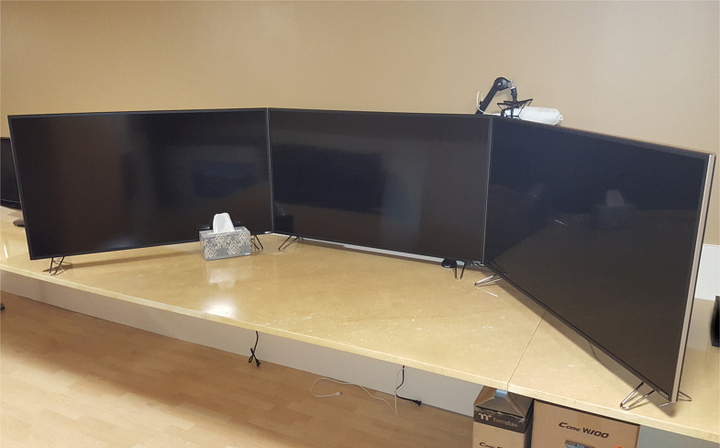 The LG is a pretty bad panel. Major issues with ghosting, pwm, and input lag.

I think you would be better off looking at 40" vVA panels, however the market seems to have disappeared. The best one was the wasabi uhd400 but I don’t see it around at all now.

The Phillips models (IPS and VA) have big problems with all of the above as well (PWM, ghosting, lag).

I checked out the new version Vizio M 2017 edition and the only real difference with the TCL S405 (sorry for misspelling it before XD) is that the PWM on the Vizio is @ 480Hz while on the TCL @ 120Hz. I have not noticed any flickering in the past on any monitors, only on CFL lights. Is 120Hz too low?

Side note: Does anyone know if I can order the TCL through Amazon prime to test it for a week or two and then return it if I feel the flickering or some other aspect of the TV deems it unusable?

Thanks for all your help and the replies.

PS. btw I have watched pretty much ALL the videos and followed most of the threads regarding 4k 40+ inch monitors/TVs, but this sector seems to be changing all the time and not always for the better…

Only you can answer that. Mine are 120Hz and it does not bother me, however I do have BFI but don’t use it. Considering the price, something has to give somewhere.

Yeah the Vizio ones have smother PWM, but since these panels are relatively dimm (TCL is about 190cd) so I will probably keep it above 50% which will certainly help reduce any flicker. Anyways for now it looks that I will be ordering the TCL and if all goes well I will keep it. Otherwise I will find a way to return it and get the LG monitor or maybe even a Sony TV.

Do you recommend the 50’ over the 43" ? The main reason I want the 43" is since it will be a tad more managable, but also it will be almost the same as my 24’ vertical. Then again the 50" will have the same PPI

now it looks that I will be ordering the TCL

Don’t forget to report back what your findings were. It will help others.

I bought 50", I think that answers your question. Also easier to sell when wanting to upgrade. I hear the new HDMI spec coming will include Freesync. Upgrade time for me when that happens.

Hurray, monitor just arrived, waiting on the HDMI and dp adapter and then I will be posting impressions, pictures etc.

HDMI 2.0a and b both support Freesync. The big gamechanger is going to be HDMI 2.1 which supports up to [email protected] with 10-bit HDR and Chroma 4:4:4 http://www.hdmi.org/manufacturer/hdmi_2_1/

I was not talking support, I was talking requirement.

Its been over a week since I got the “monitor” and installed it. I have to say its simply amazing… The picture quality is definetely not as good as my Dell U2414H, but at this price (or any at this point) such thing is impossible. Generally I am very happy, no noticable input lag, ghosting or anytrhing else (I generally have the brighness at 50% or less). Also the speakers are pretty good for what they are. I have an amplifier and speakers which is much better, but for day to day Youtube n stuff, they are prety good.

My only problem would be that when I get up close the image appears weird. Almost as if there is some kind of intentional aliasing. My GPU is a 7950 and I use it with a cablematters dp to hdmi 2.0 and an HDMI 2.0 cable. After a few seconds the monitor recognized it as 2160p @60Hz input.

I will probably post a few pictures, once I get my desk in “presentable” condition. Feel free to ask any kind of questions, I am more than happy to answer them.