400Gbps ethernet connections now appear to be online. Exciting time to be alive, boys and girls – we’re living in the future. 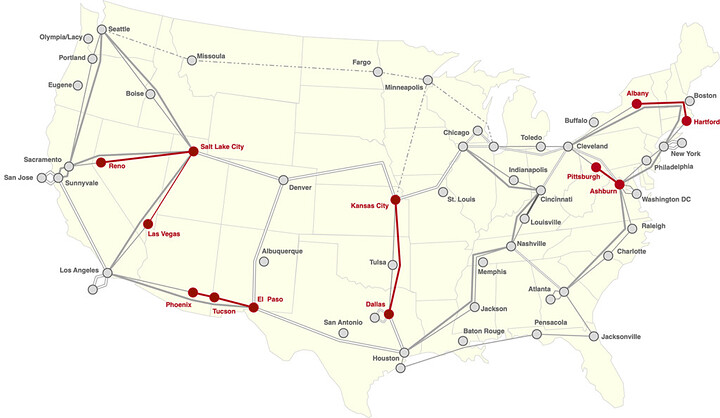 Internet2 marks the beginning of this week having deployed its first operational 400 Gbps Ethernet connections.

Yuk, with physical Wires? let me know when 10g does it to yr phone, for all the pron in yr pocket…

(Not that wireless carriers use physical on the back haul…)

Or even better, 1Tbps satellite, from our saviour, Musk…

Can anyone explain the differences and benefits between different standards for these backbone connections when it comes to things like ethernet vs SONET?

Sure would be nice if consumer gear could cost effectively do 10.

Sure would be nice if consumer gear could cost effectively do 10.

Would be nice if peoples homes had more than 16 kbits…

Would be nice if peoples homes had more than 16 kbits…

At least you don’t have to manually type the ones and zeroes you hear from the tin-can-string-phone your friend relays data from and vice versa. One typo and and my selfie upload goes piccaso.

SS7/sonet/sdh are dying and getting replaced by mpls and voip. Basically cell phones use sip and diameter, any kind of catv/dsl/fiber phone service - is based on sip. When you’re making a “cheap international call” - probably you’re using sip.

There’s a large amount of isdn and sdh hardware still deployed globally, who knows how long that’ll be the case.

I’m very surprised 400Gbps is considered fast enough to make it into news these days.

Edit: ah, it’s an education network. I was about to say, pretty sure L3 (whatever they’re called these days) and other hyperscalers are using many strands and many dwdm wavelengths per fiber to get multi terabit links. It’d be foolish not to, and all those 4k hdr cat videos and fake news aren’t going to burn themselves to CDs and mail themselves out.

And even if they did – where would anyone put the CD? Most of the youths don’t even have an optical drive on their… well phone’puters.

I needed to read a dvd on my main pc and found myself scrounging the stack of old PCs looking for one to use… and that was the first time I’d used an optical drive in … years.

We might still be on the same gigabit connections we had back when optical drives were very much still relevant… but the world has changed… even if our home networking remains the same.