390x or fury, and which option is best

Just got me a shiny new 4k ips monitor, and my r9 290 isn't really handling it all too well. Thus i'm thinking of upgrading to either a 390x or a fury(non X). a lot of games i play (warframe, banished, blacklight retribution, bf4) run fine on [email protected], but a lot of games that i've either modded the hell out of or are just more demanding/broken atm (h1z1, skyrim, fallout 4, payday 2, elite dangerous, warhammer vermintide, planetside 2) are in the low 30's. I will openly state that i'm a graphics whore, and it urks me to have settings besides AA set below High (if there's an ultra/very high option).

Knowing that the 390x is a 290x oc'd with 8 gigs, the benchmarks show a decent improvement over the 290x as is. and the 8gb buffer will help with vram especially in skyrim. but is the price premium for the fury worth it over the 390x in terms of performance?

and if i did go with either card, what are some opinions on programs like Cuttingedgegamer.com's rent-a-gpu thing?
i know you're spending more than the retail price at the end of the line, but with the upgrading options it has, along with my insatiable lust for more pretties, is it worth a try?

thanks for any advice

Seeing as how you have a good gpu as it is, I would suggest waiting until the next line up drops. The performance increase from a 290 even to a Fury isn't going to be all that great, and I certainly wouldn't pay $500 for it. The 390x is definitely not enough of an increase to both with either. Hold out, man. Unless you exclusively play shit like Witcher 3 or have tons of extra cash on hand.

Well, you could lower settings, but really not much is going to be a major upgrade

but ya, just wait for the next generation, run your games at a lower resolution or just lower settings for now, you aren't going to get much of an upgrade.

the nano thermal throttles unfortunately. i've thought of that one too, but dismissed it because of that. i've also thought of just getting another 290/x on ebay and running cf, but most of the games i play don't even know what the hell a graphics card is, let alone how to use 2 of them. but i think you're right about waiting. pascal is looking pretty interesting as of late, and my wallet and my frames will thank me in the long run. but that brings me back to the idea of the rent-a-card solution. i get better performance now, and when the next line comes out, i upgrade. ye? no? get off the internet?

I really don't think I'd ever bother renting a GPU...

The nano may throttle, but giving it some direct airflow is going to help, it has the same core count as the Fury X after all right?

IT does, but the lower clock rate because of the throttling means that it performs about on par with the Fury.

If the games you are running can't CF, then do you even need a better gpu in the first place?

well, no. they can't crossfire because they have no official driver from amd, have no crossfire profile, or are early access titles and are poorly optimized. so having the biggest beefcastle of a gpu is the only way to get better frames. is there any aftermarket heatsink's for the nano?

Only waterblocks. I still maintain that you hold off.

i probably should. but i have the upgrade itch bad... i've had the same hardware for a while now, and i like new toys. but they're damn expensive...

Not as much as you think it does, and it won't throttle at all with a power limit increase of 15%. The Nano is actually an incredible value for what it offers.

The Radeon R9 Nano is AMD's solution for all small-form-factor system builders that want to create a 4K-capable gaming PC in a tiny volume. Thanks to a new approach to power management, the card stays below 200 W at all times, while still delivering e...

Those are some cool day-one results you've posted there of a card that was running at roughly 930MHz. It sure is slower than the Fury at those speeds.

Now, as the owner of a Nano, I can tell you that the throttling is not a significant deterrent and can be easily remedied with a power limit increase. When that is done you have a card that handily beats the Fury for at this very moment $20 less. (Thanks PowerColor for their sale.)

I literally said that the difference in performance between teh Fury x and the nano was because of a difference in clock speed. But none of this matters because the best course of action is still to wait. Going from a 290 to a nano imo is a waste of money (unless, like I said earlier, he just has the extra cash).

You replied to my post with a link to some day-one bench results. No words said.

Oh you mean halfway up the thread, see there you said it's on par with a Fury when I was saying that it outright beats it. Because it does. Easily.

Going from a 290 to a Nano makes a fair bit of sense in this case since the OP is using extended shaders and modding games to require a significant jump in horsepower. Fallout 4 is one of the examples, and with the 1.3 patch the Nano gets 10FPS more over the 290. That's a 21% - 25% inprovement. (Avg) 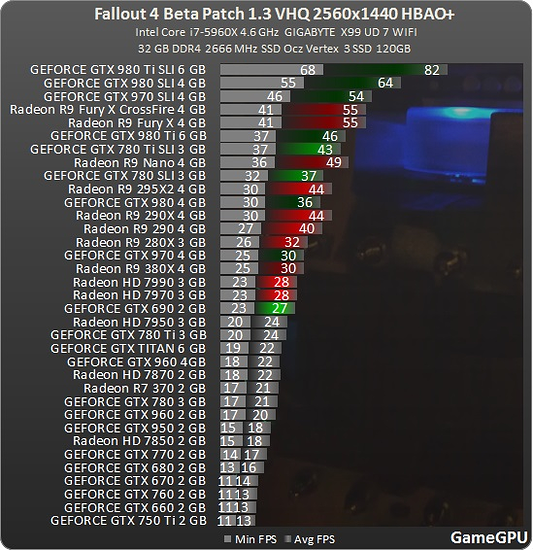 personally i would wait. it's a loooooot of money to spend on a marginal upgrade.

Same article, only this time with the relevant resolution. Average of 33 for the nano vs 21 for the 290 (neither is playable, hence it not being a worthwhile upgrade imo). The OP wants a single card 4k solution and I am sorry to be the bearer of bad news, but it doesn't exist. Next round of gpus, it might.

And truthfully these aren't a great indicator since they're running the game with AA on full blast. You don't need maximum AA at 4K, that's just silly. Still proves that the Nano can break 30FPS in the worst conditions at 4K.

An impressive card? Certainly. What the OP needs? No.