I’m looking for recommendation on a board for a Ryzen 9 3900X, using 4 x 16Gb (64 Gb) of ram. The board needs to have 3 physical pci-e 16x, one for the graphics, another for a Mellanox 40GB network card (pci-e 8x), and another for a future VM dedicated graphics card, hence I need a board with a good management of the IOMMU groups.

From I’ve read already over the internets, it seems that x570 may not be the best choice to use 4 dimms since they use a Daisy Chain wiring topology. However in a recent video, @wendell on the EposVox channel mentions that they achieved 3200Mhz on a 3900X using a X570, if I’m not mistaken.

PS: If possible all this using a board not as expensive as the cpu

–UPDATE:
Although during my research I was being move towards X470 Taichi, after this video : https://youtu.be/UtEmvoPS4WE?t=335 where @wendell explains the IOMMU groups attribution differences between X470 and X570, and after view this review ( https://www.tomshardware.com/reviews/asrock-x570-taichi-amd-ryzen-3000-am4-atx-motherboard,6217-2.html where a Daisi-Chain motherboard, in this case, AORUS x570 has better 4 dimms performance than a T topology motherboard like the Taichi X570) I realized that probably I’m better suited with a lower grade X570 (I mean… sub 300€ ) than with a good X470, now the journey continuous.

TL/DR: on Ryzen 3000 shouldn’t be a problem and the impact should be minimal…

Asrock x570 Taichi should be sufficient

Since you will be using 8x for gpu and 8x for nic, leaving you to have to put the 3rd later use card off the chipset

it seems that x570 may not be the best choice to use 4 dimms since they use a Daisy Chain wiring topology. However in a recent video

Appart form Asrock which is using T topology.
But yeah still questionable how the new Ryzen chips will handle 4 dimms.

Thank you for your replies.
And on x470 front, do you guys recommend me anything?
Although the x570 Taichi seems very good, if goes a bit far off my expected budget (same for next gen TR)! I was looking for something below €300 ($336).
PS: I’m not planning on doing any O.C. to the CPU or GPU!

I am planning a similar build but with two graphics cards.
I have been looking into the X470 and it seems pretty decent.
Considering the price difference and with no need for overclocking is it really worth it to go for the X570?

I’ve seen a video from Buildzoid on which he states that on power level, the Taichi x470 should be more than enough for a 3900x, I’ve read some other posts, namely 16GB RAM modules on X470 on which the user seems to be running 4 x 16 Gb dimms with a reasonably clock speed. Do you guys think a Taichi x470 should be a good motherboard for my stated needs?
Thanks

I tested the 3900x in the recent vid on the x470, it works rather well BUT has some pcie3/4 quirks. You need a menu option to pick pcie3 and right now its just “auto” and pcie2 which is not good.

Btw, for those looking for the same info as I am, I’ve found this interesting thread on Reddit:

Also, in here theres a comparison between X570 Taichi, X570 Aorus and X470 Aorus using 2 and 4 DIMMS.
It seems that in practice the daisy-chain topology on the Aorus X570 beated the t-topology on the X570 Taichi using 4 sticks of ram! 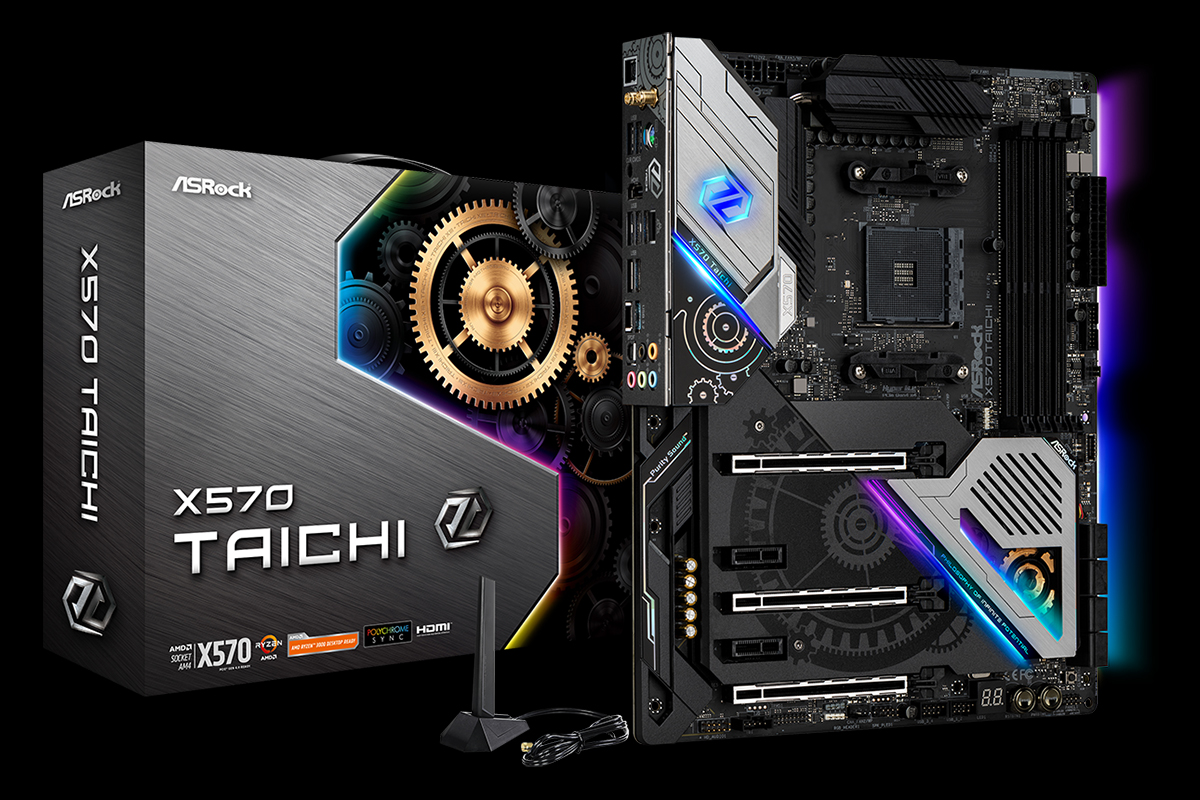 Firmware The X570 Taichi’s OC Tweaker menu provides the overclocking controls we needed to reach 4175 MHz at 1.375V. More voltage would allow it to run temporarily at 4.20 GHz, but that’s hardly worth fighting for at the cost of CPU longevity. The...

Yeah Asrocks memory QVL listed speeds can be taken with a slight grain of salt indeed.

They handle it just fine. From a few overclocking communities they are doing just fine with daisy chain… Its just about loosening the timings on daisy chain vs T in a couple areas in order to push the clock and some additional drive strength. Im not an expert in it but its fine…

First of all, I would like to thank everyone who spent their time responding to this post.

I’ve bought the Gigabyte X570 Aorus Pro along with 64Gb 3200Mhz CL16 (G.Skill TridentZ). At the moment I only installed 32Gb because I wanted first to test the system with only 2 sticks.

Funny thing, it booted without any problem on my old FX harddrive running Manjaro (Arch based) with kernel 5.2.1, running a Virtual Box win 10 VM and creating a new win 10 VM on KVM in this very moment… The currently installed 32Gb are almost over, but the cpu… damn, it just flies!

I’ll give updates as soon as I install the 64Gb. Btw, the XMP on the Bios immediately detected the right frequency and timings on the memory sticks!

as those are intel chipset style lanes, there is only an x4(gen 4 atleast) to the chipset, assuming the chipset works properlly you could theoretically get an x8 gen 3, if you used no other bandwidth(so no sata, extra m.2, possibly networking etc depending on board)

if you demand/require actual third x16(or even just 2 given a x8 network card would drop the first x16 to x8 as it is unlikely they have a pch or something capable of converting gen 4 to gen 3 of double the lanes on most boards, to get 32 lanes from the cpu at gen3 for graphics)

Thanks for the warning, but I only need a third physical 16x( 4x gen 2) for a high speed network card.

should be fine then, if x8, x8 for graphics and then x4(gen 4) total to the chipset will work, as i doubt many/if any boards would have the hardware to convert gen 4>3 or 2 etc, so probably still x8 on graphics, not sure what all the x570 chipset does, but them ‘20’ lanes or whatever will not be able to do anything beyond the x4 to the cpu, but the previous x370 did switch it down from gen3 to 2 to get extra lanes, so wouldnt be surprised if 570 could, in which case you could still use some sata or whatever while using an x4 gen 2

As I stated before, with 2 X 16Gb the system worked perfectly with XMP (3200Mhz CL16). Note, I’ve tested each 16Gb pair and both worked fine.
Although… the moment I plugged all 4 dimms the system crashed randomly. After some bios configuration changes only on the memory multiplier, got a stable configuration using 64Gb without performance decrease… In fact, a synthetic benchmark showed a significant performance improvement between 2X16Gb 3200Mhz using XMP and 4X16Gb 3200Mhz manually configured and XMP disabled.

Likely because daisychain memory topology,
instead of T topology.

But i believe only Asrock is using T-topology on X570 currently.

Yes, from all I read about the Taichi X570, it is using T-Topology, but from a review I posted here ( https://www.tomshardware.com/reviews/asrock-x570-taichi-amd-ryzen-3000-am4-atx-motherboard,6217-2.html ), it seems that on X570 and Zen2, daisy chain seems to be the better choice even when using 4 Dimms, see also the Buildzoid video I posted ( https://www.youtube.com/watch?v=14TFMu1pItQ ) . He talks about the Zen2 memory controller and DaisyChain vs T-topology.