hi i know you guys are pretty active round here so i figured i'd see if you can help.

after expereincing some questionable performance in some games and the likes of dolphin i thought i'd actually run a performance test on my hardware.

although most things seemed to be alright the cpu was rather questionable. 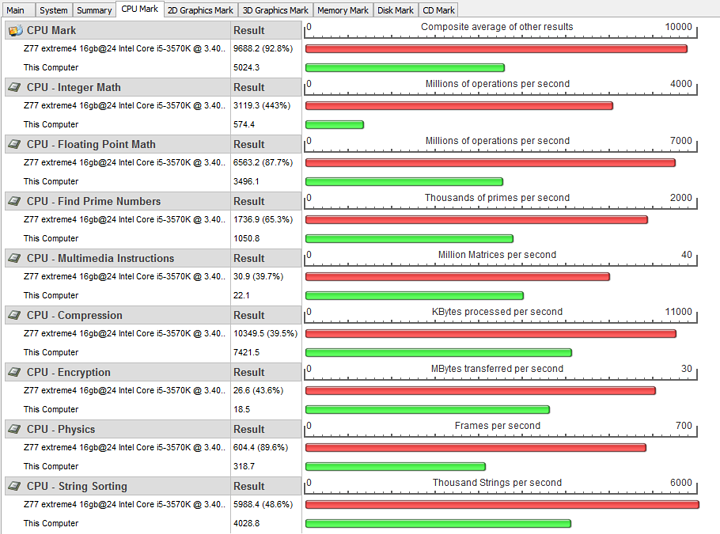 So does anyone have any ideas what could be causing this?

The other set isn't OC'd as far as I can tell and all other results show similar performance with mine trailing behind. I haven't UC'd my cpu either and have tried even restoring to defaults to see if I had but nope still similar performance. The most shocking one is the Integer Math as I am clearly way way WAY behind on that.

Update: I OC'd to 4.2Ghz and I am STILL behind some results albeit matchup with others.

Is it not strange though that my 4.2ghz 3570k only just compared to others stock? 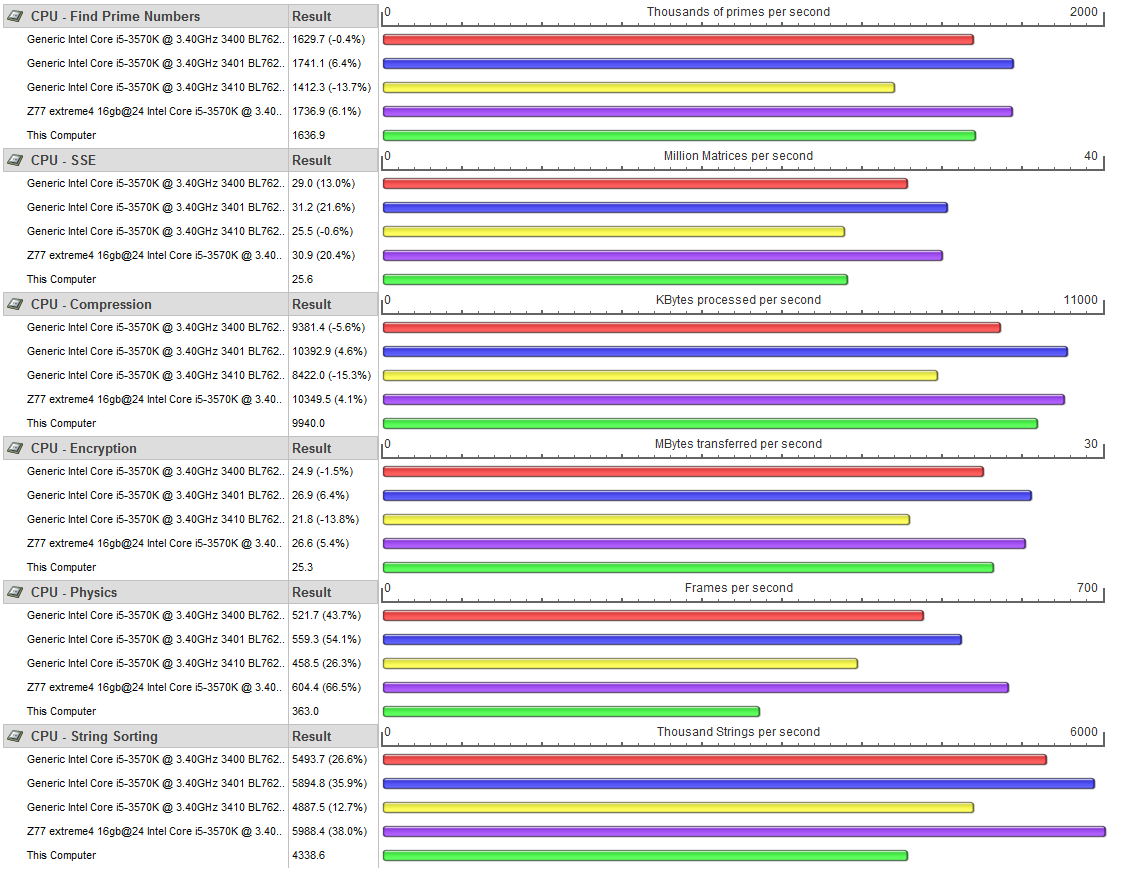 Try installing HWinfo and monitor temps, and usage while running this test. It might be throttling becuase of the temps, or maybe it isn't maxing your cpu. It could also be that there are other programs running in the background. Check task manager to see what all is running (look at processes for all users and having it list them by cpu usage to get a better idea).

yeah,most likely it's throttling.being an ivy bridge i wouldn't be surprised

Im away from my PC ATM, but I use a 3rd party cooler and I've ran these tests after restarting my PC where the temps are low.

Will double check though.

Run some benchmarks in linux instead of windows (you may have some corruption somewhere) - phoronix suite is a good one.

Alright will update this thread tomorrow with some Linux benchmarks.

update: I did the benchmark while looking at speedfan and the temps never went past 60.

Ok I think this is a symptom of a much deeper issue.

Some apps namely Skype and GeForce Experience have been sticking during crossing over monitors. http://youtu.be/xSc-G5gAw5Y

And another one I have noticed, using YouTube or Teamspeak during playing a game RUINS performance. It also causes another strange issue with the mouse which I will show in this video: http://youtu.be/4q-ExS7cvfo

I first play the game without any youtube videos open at all. The mouse glitch appears to happen once, not sure why. Then I open a 4k youtube video (which my 3570k fails to run properly and stutters like crazy) and I then attempt to smoothly move my mouse back and forth but it instead jerks and random intervals.

Strange no? To me this is a sign that my CPU is absolutely losing it.

Rare for a cpu to be at fault, I would hedge by bet on the motherboard if anything. Then the RAM, followed by hdd, psu then gpu.

What motherboard are you running, what memory, and what are your memory timings?

try and get another pc from a friend that has compatible hardware and swap the processor and from there on you can try a lot of things..maybe you can narrow the actual reason of the problem

My motherboard is an Asus P8Z77-LX2, all up-to-date on the BIOS as I did that yesterday as a potential, but unsuccessful fix.

My memory is a little messy, but here is a picture of them in memtest: http://i.imgur.com/P22CmCJ.png

After 10 runs at 102 tests they threw out 0 errors after 9 hours of Memtest last night. Still though if they are cause for concern due to their differences then please tell me.

Unfortunately I am not able to swap parts with someone else and I have no spares to further test this issue more specifically. None of my friends are big PC gamers and mostly either have laptops or incompatible parts.

Also with regards to the other parts

HDD: I use an SSD

PSU: It's brand new and these issues were prevalent before this.

GPU: same as above.  will try putting me previous one in though just to double check.

I put my 7850 back in, instead of my 970 and things seem to be normal. I sworn I had some of these issues previously but it appears I didn't.

Somehow even my CPU Benchmarks rose.

Perhaps there was a strange driver issue I had, or does anyone here know of incompatabilities with the 970 and this motherboard/cpu?

Did you clean the system of old gpu drivers when you swapped out gpu's in the first place?

I did. But perhaps I got some bum drivers.

I also think this case is a little awkward for the gtx 970. After putting it back in I noticed the smaller connector closest to the case doesn't appear to be properly in, as if the IO shield is stopping it from fully getting inside the slot.

Perhaps I should look for a bigger than Mid case.

Starting to think its this 970 causing the issues.

Something else I have noticed, whenever I switch from v-sync enabled to disabled on WoW I always get these graphical glitches http://i.imgur.com/VPQJP9y.jpg

then do a clean install of the latest non-beta drivers.

Just out of interest what pcie slot are you using, it may be worth going to the lower (black) one - yeah its pcie 2.0 but just maybe there is an issue with the top slot.

Also Im not sure what to look at in your screenshot. Ive never played wow and I have no idea what im looking at.

Yeah I have been using that whenever I have switched cards.

Yeah I am using the blue one so perhaps I can try the black.

Ah well this is what its meant to look like: http://i.imgur.com/Pl1qPHF.jpg

Notice the missing icons and the graphical glitch in the top right.

No wonder you're having problems.  Your memory is all jacked up.  Why are you running 1066mhz?   Take out the 1 stick of Gskill.  Also with having 3 ram sticks you are running in single channel instead of dual channel.

This type of thing, requires a /facepalm

I agree the memory config is non-optimal

If his memory config was the same prior (when he had the 7850) then it shouldnt have had that much of a detrimental effect i would have thought.