So, I've been on linux for a pretty long time, however I still like the workflow of the windows GUI, hence I use KDE plasma.

But, since I have a R9 390X, I suddenly went from OpenSUSE to Fedora simply because of support for the card, and then it hit me, fedora is a gnome advocate...too late, already installing, already committed, welp time to find out if this support plasma, it does.

So I figured, you know what, I'll give it another try, give it a second chance, it probably improved drastically since last time I used it. The time frame I thought off is "hmmm, 3 months should do it, enough time to judge it, and others won't easily dismiss my claims if I spend that long on it (the simple minded ones, you gnow what I mean (....sorry, I'll let myself out))".

Initial thoughts (Baseline):
I tried and tried to think of one positive thing about gnome but last time I used it, it was treating me like a child, no bare metal customisation, horrible, horrible workflow interface (Who really likes the massive headers?!?! wasted space!) and don't get me started with the all-in-one on the top (I hate unity with a passion, it's probably sending me the same vibes)...ugh.

On a side note: Of course, if I see something I don't like, I'll try to improve it, fix it, but rest assured I won't be getting rid of gnome and will still use it within this time frame.

All of the people here who use fedora are sure to be mad at the gnome hate.

Better get the popcorn ready.

You want butter with that?

But for the love of God, if they could do an update without breaking extensions that would be dandy.

One can dream. So I stick with KDE.

I'm using Gnome on Fedora 25 for over a month now, but I am considering switching to the KDE spin..

I think it's stable now.

If you need any gnome tips , shout.

Tip one. Install gnome-tweak-tool and set your mouse to a flat profile.

A) tweak tool
B) keyboard shortcuts

I've tried many DEs and gnome is the fastest for me to work with. Switching between widows, workspaces. Opening new windows... No complaints for gnome from me.

Yeah, I've already delved into the tweak tool, my god, it was much worse when I used it last time, but now it's kinda bearable for now, pixel-saver is pretty good, still experimenting....

Single DE heathens gonna hate. KDE on the desktop, Gnome on the laptop.

I'm gonna check out that gnome tweak tool now though.

Odd thing is with the AMD drivers for the 290 in the desktop running kernel 4.8, gnome on the laptop runs better than KDE on the desktop. That's all drivers though...

I've tried EVERYTHING when I started using linux, DE's and Distro's. Kubuntu, was my first, then OpenSUSE KDE, now trying out Fedora Gnome.

I don't dev so I've never tried opensuse. Might get into fedora, apparently good for corporate environments and I would love to try to move open source and linux further into everything.

I don't usually delve too deep in the DEs to tweak them. Most do what I need out of the box. Which is a good thing for more usage in the home space.

I do see what you're saying with KDE and Gnome though. gnome really does hold your hand.

I really like that people never specify which space is wasted. Because header bars usually save a large amount of space as in absolute number of unused pixels (vertically + horizontal). Only exception is Ubuntu where you sometimes have title bars + headerbars (they've patched it).

Many people like themes with little padding and Adwaita has more padding than the average theme, but that doesn't make header bars space inefficient.

I tried KDE briefly but one issue drove me crazy to do with how I use my TV in multi-monitor mode.. Both KDE and xfce exhibited strange unwanted behaviour. Gnome isn't perfect by any stretch, but it has been far more consistent for me.

So for the most part I've been using Gnome for the last 2 years and it's pretty good, the only thing that I've bumped into is some extensions getting broken during upgrade, but it's not every time or I haven't experienced it for a while should I say.

But for the love of God, if they could do an update without breaking extensions that would be dandy.

Indeed - for me the same - I initially hated gnome3 as well - coming from the blessed world of gnome2 - my grief and hatred was high.
But now been using it for years - and I honestly have to admit I am realy happy with it - customized to my optical likings and the workflow I also like now - hope they do not change it majorly again though!

By the way, which huge panels do you mean? 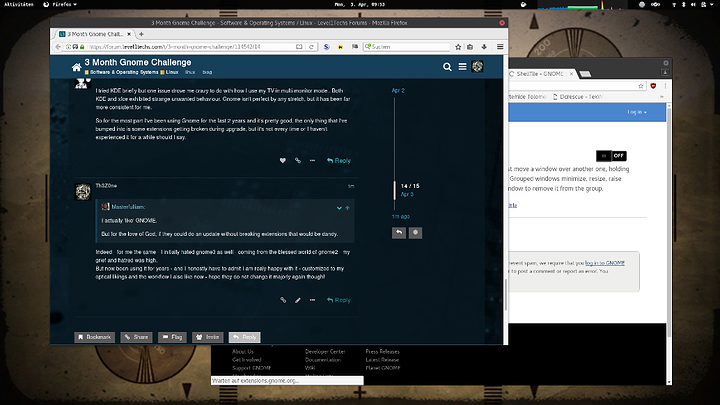 I'm going to have to disagree with you there, having bloated headers not only reduces my vertical real-estate, but also tilts me (If I can improve it, I will, no ifs no buts). So far I've made it manageable with gnome extensions and the tweak tool.

However I do acknowledge the fact that it's one own opinion on how they operate within their workflow and environment, it's always to an each their own argument, You've had your say, I've had mine, where done.

I wasn't much of a fan of gnome 3 when it came out. But it's improved with every release, I've been used it as my main desktop environment the last few releases (currently on 3.24).

I'd love to see something comparable to krunner, but for everything else it pretty much fits my needs now quite well.

A couple of nautilus extensions you may want to install (search for nautilus in dnf) and a plugin or two for some additional functionality if needed.

Since your going for 3 months, i think you may be in time for the next fedora release with gnome 3.24 as well.

What's that graph extension you have in your title bar? Does it display CPU usage?

Yeah - in the graph is shows load, ram and net at that config.

best to clone it from git - https://github.com/paradoxxxzero/gnome-shell-system-monitor-applet

Wow, I've tried many tile extensions before but this one is perfect. No fluff, just works.