I am upgrading my PC with a Seasonic TX 1000 (already got it) and Fractal Torrent Case (on its way). I use my current setup with a Fractal Define 4 and an old Silverstone 750 Watt PSU. Currently I am using the second GPU mainly for a work VM which requires basic 3D acceleration for certain programs. Often, one of my friends visits and we are playing some Multiplayer games together. (Halo Infinite, FF14 Online etc. various other PvP games of the shooter variety ) and it would be cool if he doesn’t have to bring and setup a second PC for this.

As additional info:
My 3080ti (GIGABYTE GeForce RTX 3080 Ti Gaming OC) is in RMA but the PC / performance was rock solid when it worked. But I am not really sure what killed it. When it died (black screen, fans going crazy) I wasn’t doing anything in particular heavy (browsing reddit) and the GPU2 was’t attached to a VM or under load - I got a better PSU just to be on the safe side.

In my opinion, just because you got a car(psu) that can run up to 180mi/h(1000w) does not means you should.(all the time)
80plus (in the old days) means that that should be the sweet spot operation.

With all that, 1000w is and is not enough. But that is in how you’re using your computer, how much overclock, are the disks being using all the time, how hot is your system, do you plan to add or remove?

These modern CPUs/GPUs, will pull far greater wattage in boosted periods
These boosted periods, can have your system trip, if not enough power available
… Thas not including any BIOS / Afterburner adjustments

Your 1000W would likely be running, on lower efficiency of power curve beforehand

Thanks for all your input. I got my 3080ti back, and upgraded my PC with the new components and the new case. It’s running fine and much quieter than before.
The temperatures reported are 15C lower on the “hotspot” of the 3080ti - 75C now vs 90C in the old case under load. I use my PCs at stock speeds and don’t over- or underclock.
My standard workload: gaming VM and running my work VM, a few containers and a Linux VM at the same time works without issues or any sign of instability.

I follow up with fotos with a bit of tech cringe

As promised. Here is how a fully loaded Torrent looks like:
I don’t care much about looks and reuse components and cables if possible. The reason for the cheap ass SATA cables (red and blue) is that these are the only ones in my collection with a right angle connector I can put on the mainboards up facing SATA ports, which won’t block the GPU. The card sandwiched between the cooler and the back of the case is a Rensas 7 port USB 3.0 PCIe card on a PCIe 1x riser which is connected to a blocked 1x PCIe slot on a right angle PCIe connector. Fortunately the cards half-height bracket fits just right there. The USB 3.0 ports are routed outwards with USB 3.0 A bracket cables through the first opening above the 3080ti (not yet done when the fotos were taken). 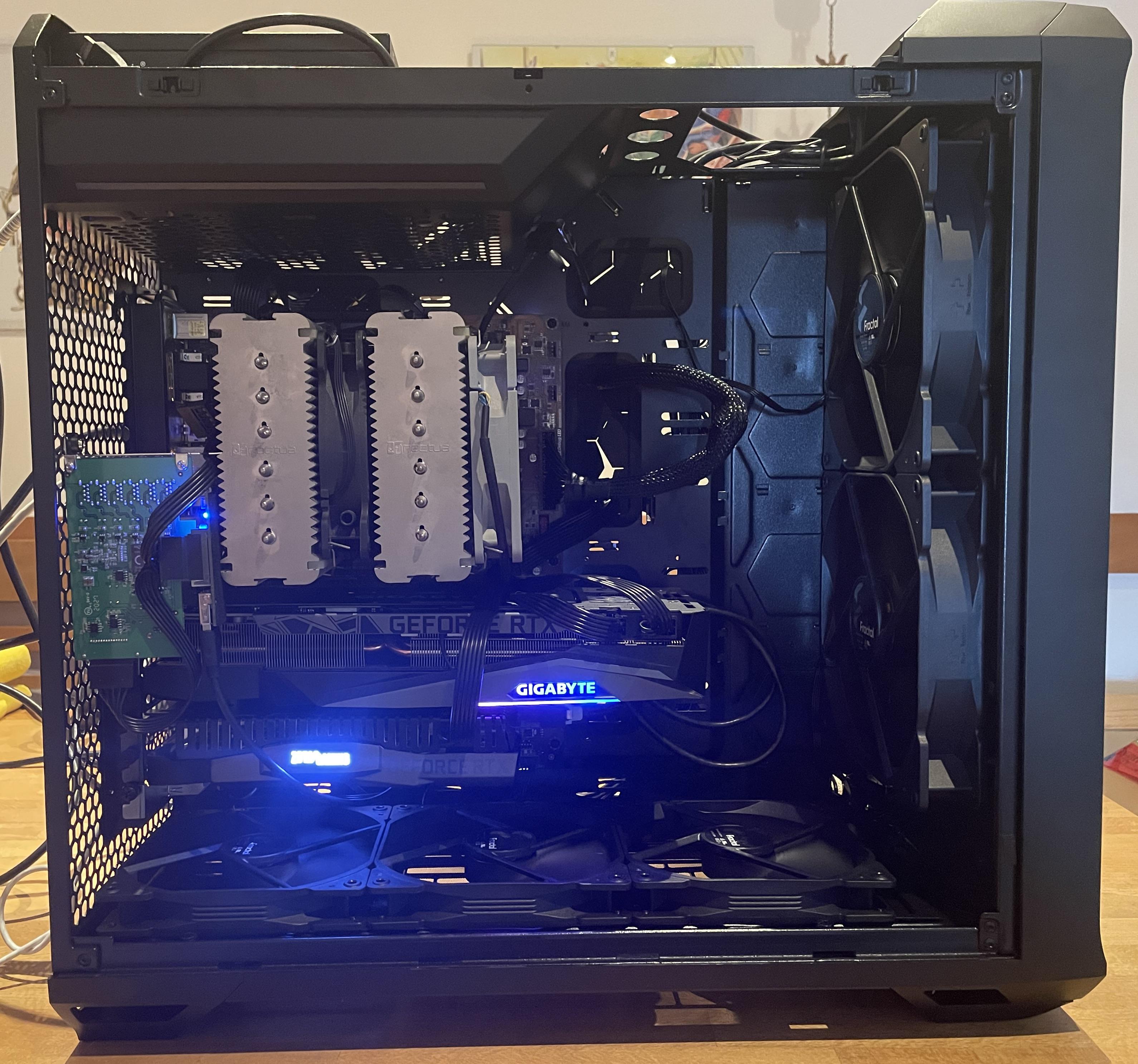 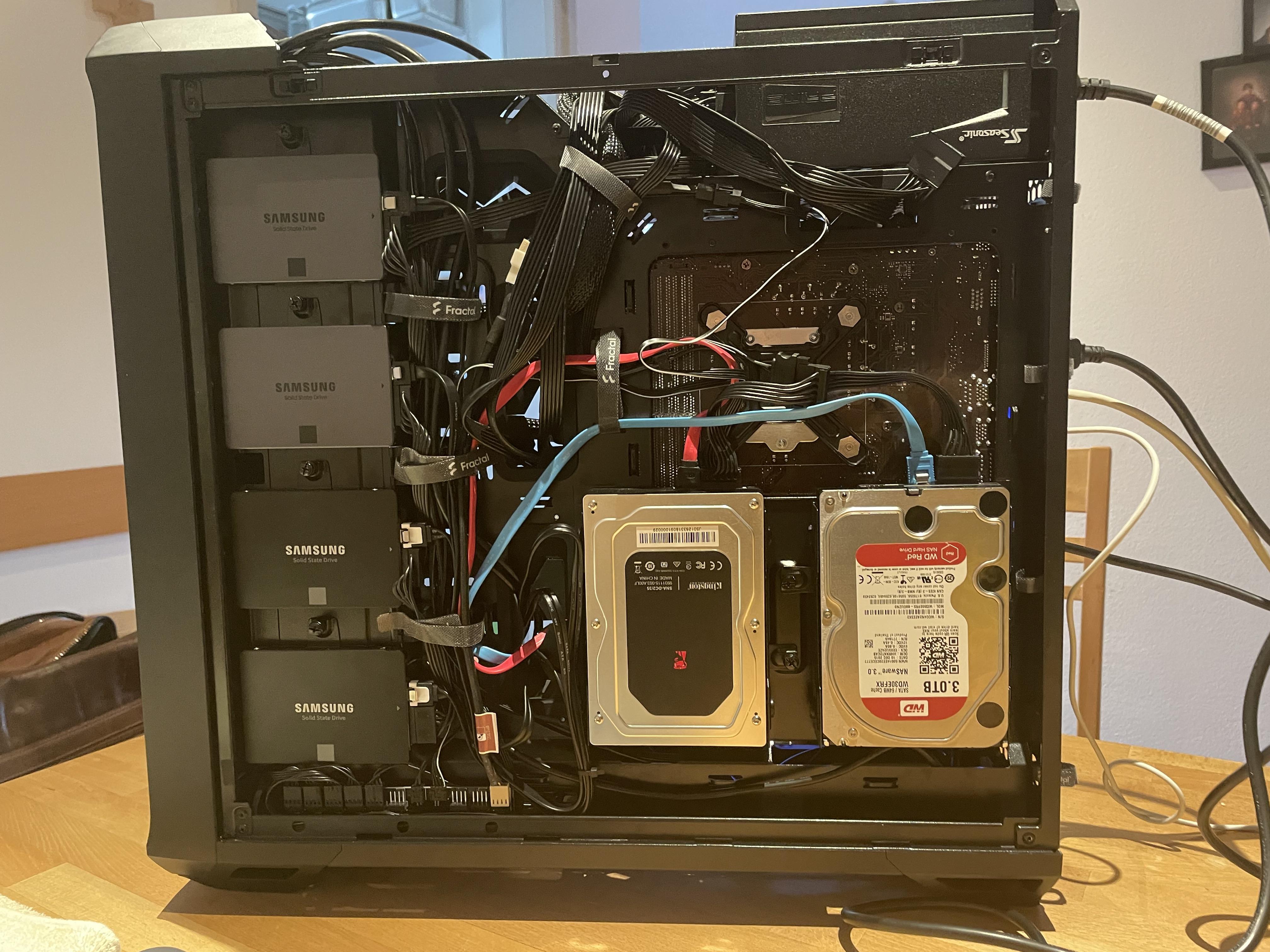