I’m building my first computer and it’s a daunting prospect since I’ve only messed around with some cheap old HP desktop clients previously.

My build is loosely based on Wendell’s advice though maybe I’ve made some mistakes.

I’m currently waiting for the delivery of a 16GB Kingston USB for installations and Thermal Grizzly Kryonaut Thermal Grease Paste.

Also I’m deeply intrigued by Wendell talking about installing Linux Mint on it then running VMWare 15 and it’s pass through capabilities to run Windows 10 Pro or Windows 10 Workstation. I’ll really need to know it I can install drivers for that Cintiq and do a pass through to the USB or USB-C it’s plugged into. Wendell claims that this setup is so efficient I’d only lose one CPU cycle for a virtual machine… 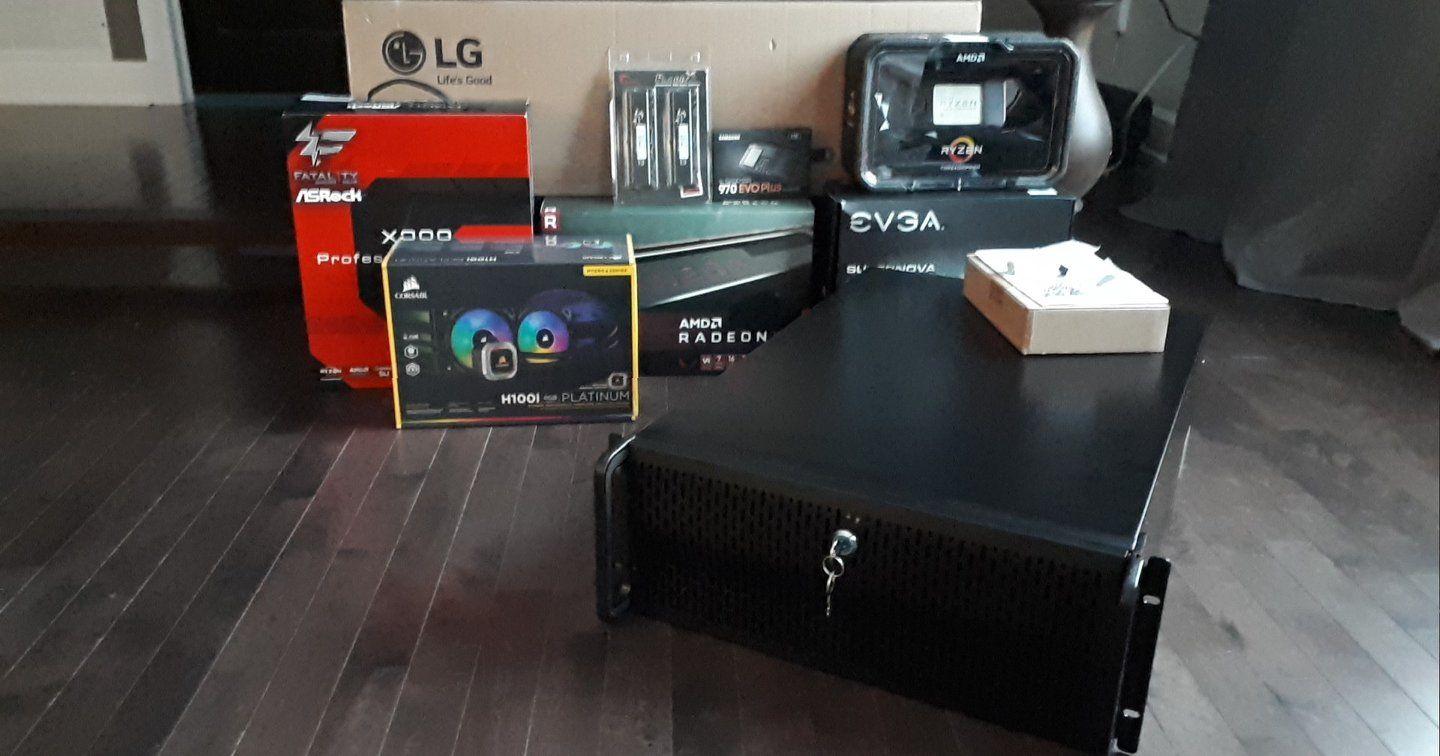 So this thread will be all the problems a more or less novice will have in trying to assemble this expensive stuff. And I really need it bad. I am a 3d Graphics junky, I desperately need my fix.

Now on the Reset wires, I know Green is Ground (-) and Black is power (+) but the Power wires, white and red… 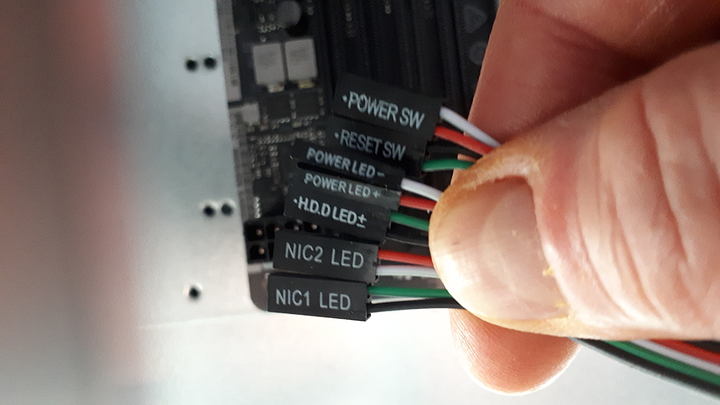 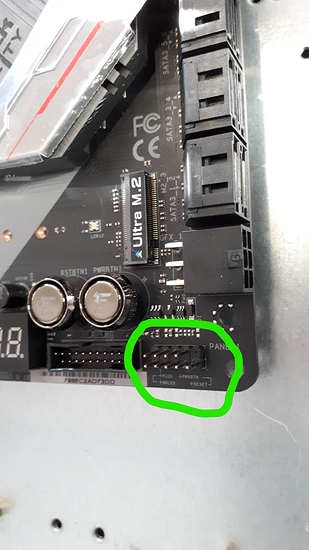 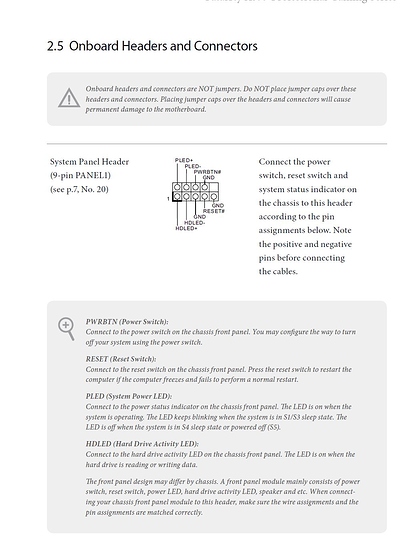 yes I know, i’m a hopeless tard…but what exactly goes where? Please if you can spell this out for me exactly…

The first question of many I’m sure…

That ssd should work fine, as for your wiring on the power and reset switch, it doesn’t matter it has no polarity. That’s why there are no + and - symbols on it.

The only things you need to be caution at are the case leds.
Case leds (Pled) (Hddled) are polarized so + and - depended.
But the power switch and reset switch are not polarized.

Too bad ASROCK included the 3 xM2 screws but NO STANDOFFS.

Are you sure they are not just in a zip-lock bag somewhere in the mobo box?

The standofs should already by mounted on the mobo. At least mine were.

The standofs should already by mounted on the mobo. At least mine were.

More proof of my mental retardation…yes they were but they were so stubby that I overlooked them. Thanks. 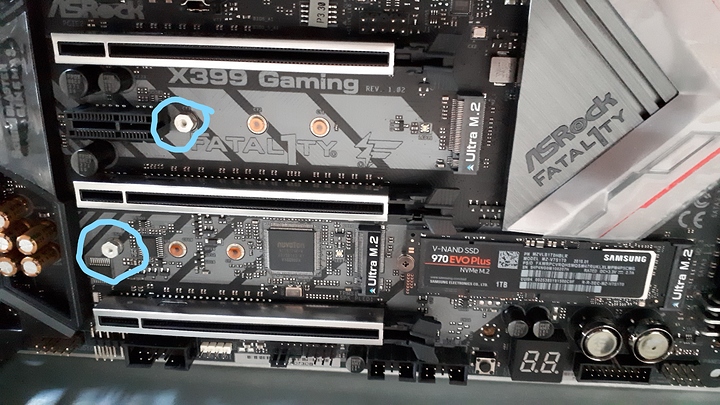 I can’t believe you can have a stick of Wrigley’s chewing gum with 1 TB in it!
I can remember Apollo 11 going to the moon with an onboard computer consisting of hand woven RAM made of fine threads of copper wire interwoven with ring magnets by hand. 10k RAM cost $10 million in 1970 money. That’s like about $80 or $90 million in today’s money. 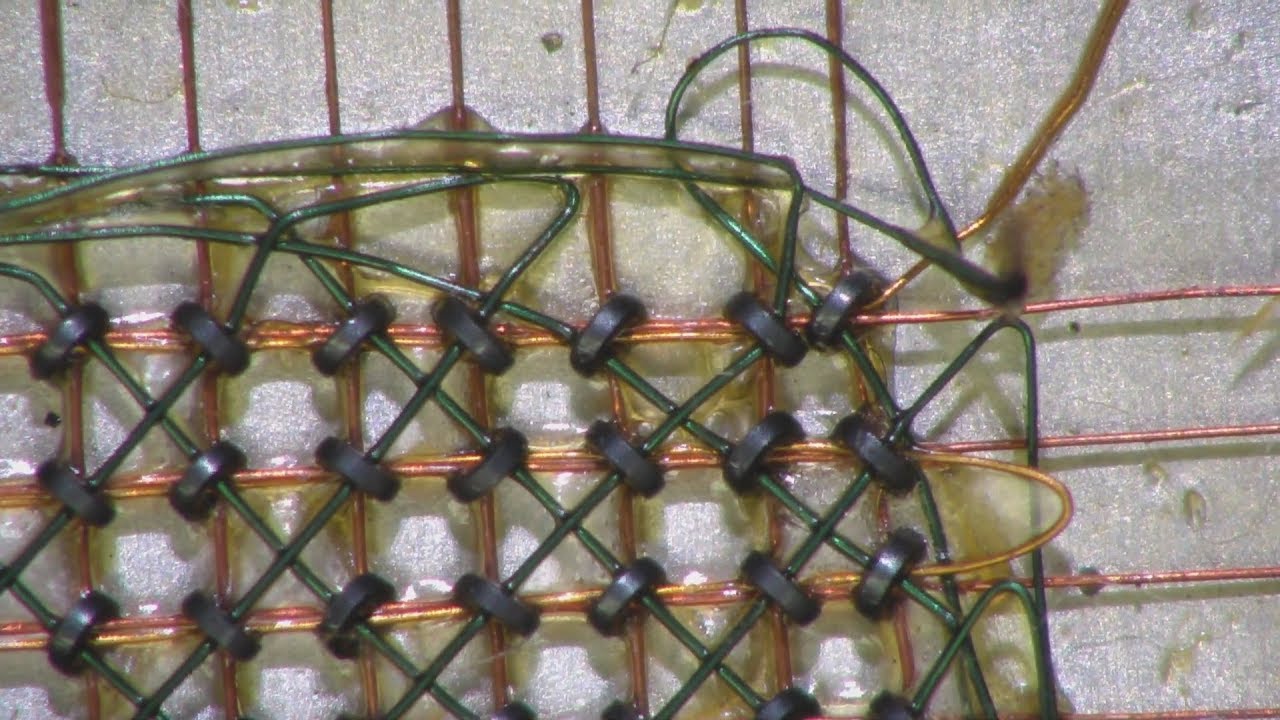 More proof of my mental retardation…

Happens to the best of us.

While in there, remove that plastic film: 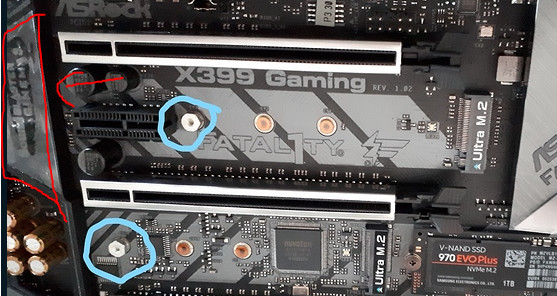 While in there, remove that plastic film:

Where did Wendell talk about VMware workstation on Linux and passthrough?

Won’t the vega reinitiation bug be an issue here?

You might want to look through this one too, but I don’t have time to listen to it all again;

I will say the VMware Workstation install isn’t as ‘Click Next’ as the Windows installer. Just saying as a precaution if you haven’t installed it on a Linux box before that you’ll need to install some additional dependencies on Linux Mint (gcc primarily) and then bare in mind that VMware Workstation may or may not work with updates to the gcc package you’ve installed.

I will also say that you’re going run into cooling issues with the default front panel/foam insert on the Rosewill case. Would evaluate the thermals first though for your configuration to see if you’ll benefit from it.

Here’s the vid I was looking for on passthrough with VM’s.

And from what I’m reading the passthrough isn’t just limited to the GPU(s).

You can stipulate passthrough to certain USB and other hardware sockets. I’m wondering if you could run a Wacom Cintiq through a VM on top of Linux. There’s some posts out there that indicate you can.

But it’s all terra incognita to me. A fascinating area to explore.

Yeah I’ve had lots of warnings on my thermals for this build.

Maybe a rack mounted server case is not the best option and I’ve been told a big air cooler in a standard desktop case might be preferable to the Corsair H100i Platinum, which in its favor at least has a substantially larger cold plate than the H100i and H150i V1, V2 and Pros.

It took me three days of stumbling through all the cooling options and their arcane nomenclature to discover this. The Plantinum Hydro series just got released in January 2019 and not a lot of people know about it’s bigger cold plate;

I chose the smaller 240mm radiator H100i Platinum over the 280mm H150i Platinum because the smaller H100i still left an entire space in the width of the server case for a single 120mm fan next to it. It’s a tradeoff. We’ll see how that works out. 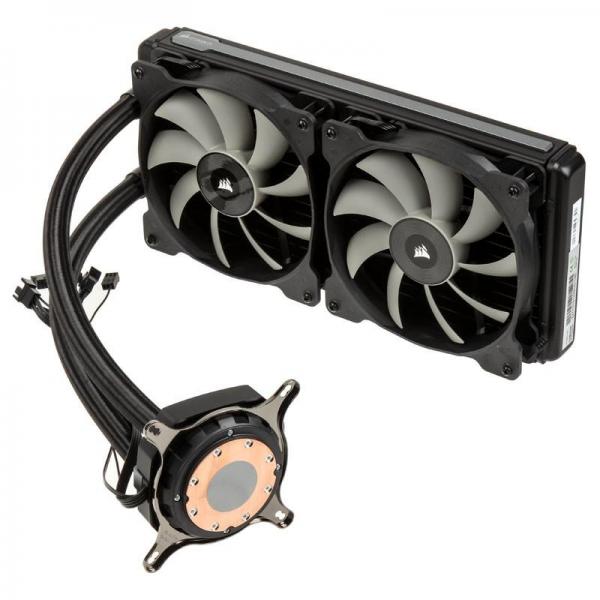 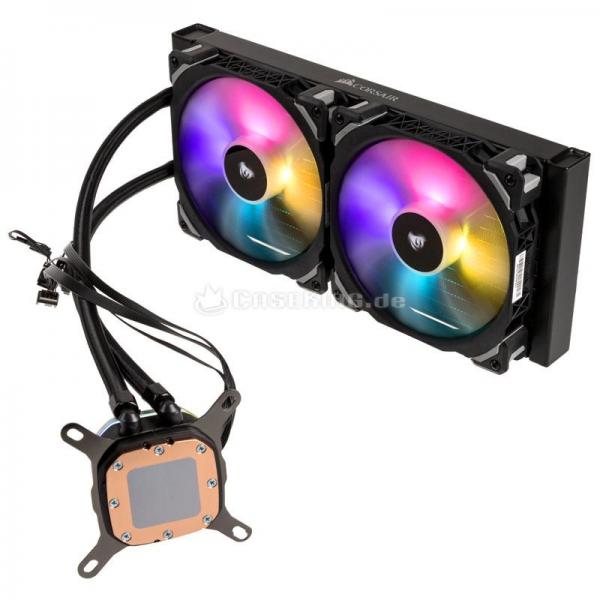 I’ll keep that in mind about that foam facing. My new house has a good filtered HVAC system and I’m way out in a suburb on the edge of the countryside so big city dust like my old apartment on a busy bus and truck route is no longer an issue.

No more trying to clean the mess of diesel soot out of my old dual Harpertown rig.

Nice. Yeah the H100i’s cold plate isn’t particularly good for TR unfortunately. The Enermax TR4 AIO I believe has the full size cold plate or this Noctua cooler would work well in the case: 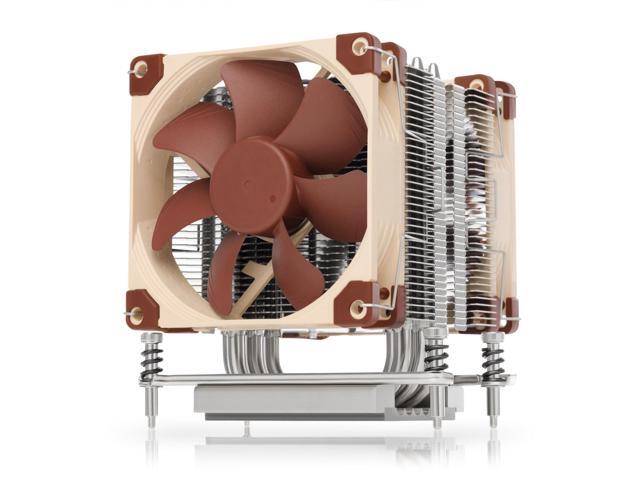 And yeah, the foam insert kills air pressure. The Rosewill fans are also not good, so if you remove all of the 120mm fans, the foam insert, and put 3 120mm Noctua or other decent quality fan you should get pretty great cooling

Also, believe it or not, you should be able to get some pretty great temps having your PC in the RSV-L4000 case, better than most gaming cases. Just needs 3 good fans and a less obstructed intake

I had a good look at that Enermax TR4AIO. There’s two editions I and II. I read all the reviews on New Egg and Amazon. It’s true Enermax has the full sized cold plate for the Threadripper BUT they’re poor reliability with gunk plugging up vanes, pumps failing and a lot of leaking.

Corsair may not be perfect but in all the reviews I read online it seemed the most reliable and least leak prone. I think they were the first to have the maintenance free AIO so they’ve got a long history to look at.

Whoa…that air cooler would fit in my case eh?

Would this fit too? I hear it’s better than the Noctua even…

I was seriouslly looking at this option but the size with the stand offs for the mobo made me doubt it would fit…it’s cheap too…like $100 or so.

Rosewill does not provide any info regarding supported cooler hight, but as the case is merely 17.8cm tall and the beQuiet cooler is 16.3cm high, I don´t think it is going to fit.

The NH-U9 @2bitmarksman mentioned is 12.5cm tall and meant for use in 4U cases.

First aid did not see anything or hear anything about VMware. 23 min mark is basically end of video. I will do some messing around with VMware workstation and see what I come up with.

I have a noctua u12s TR4 specfic heatsink and the same rosewill case. The u12s is 158mm tall and about 4 mm too tall. The be quiet TR4 is way too tall.