The 200mm side panel fan on my 500R died so I'm going to replace it with two 140s, because there just aren't really many options for 200mm, I can't order a replacement from Corsair in my country and the Noctua 200mm won't be out for a while.

I think I'm going to go with the Corsair offerings to maintain the white LED theme I have going on (I would have bought a 200mm Coolermaster but they only make blue and red), but I was wondering which version to go with. Do I need high static pressure if I'm pulling air through a grill, or will AF be fine? I'm leaning towards SP since I don't seem to be able to get AFs in a twin pack.

Their main purpose will be blowing air onto my GPU, so I don't know if SP would make a difference in that scenario.

so i just bought myself two AF140s white led for the front of my 300R. i think AF is fine for intake. SP i see more for heat sinks or rads.

AF is for Air Flow and are meant to be case fans.

SP is for Static Pressure and perform better when pushing air against a radiator or high resistance. I'd go with the AF

AF for side panels. SP for radiators, and very particular instances where airflow might be restricted.

Basically, what everyone else has said.

Everything everyone has said is right,but also there isn;t even a corsair SP140, they only have AFs in 140

Nope, they have launched an SP140. Only recently, and after much persuasion from Linus (yes, that guy!) and the wider Corsair customer base.

The SP series fans have the larger fins, that you can see below: 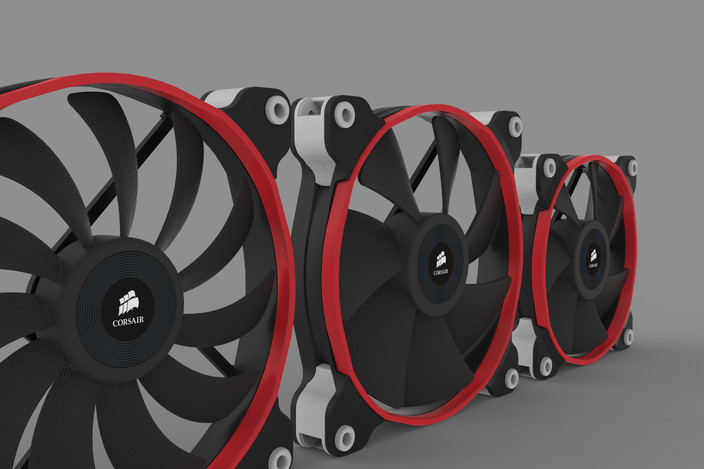 SP fans won't help pull air through a grill any better. Static pressure fans don't suck more air than a air flow. With a Air flow if you have a water cooling rad the air will go through to a the fine. But because of the pressure of the air on the rad some will leak out between the blades.

To fix this they came up with static pressue. That's why the blades are extra wide and the gap between them in more narrow. There for pushing air past an obstruction like a rad or hard drive cage.

If the area behind you fan is open use air flow. If it is obstructed us Static pressure.

HOLY SHIT IVE BEEN WAITING FOR THIS DAY FOR SO LONG. buying now. Thank you great sir