$120 Gaming pc for league and minecraft

Hey guys My names Griffy It's nice to meet you. I worked for this money instead of asking my parents so that's why my budget is so low. this is what I've built

GPU: Quadro 6000 Purchased ( Was trying on selling it to increase my budget but I couldn't find anyone to buy it if your interested I still really would like to sell it )

it is now fixed im am very sorry to everyone

It looks like you will only be able to use two sticks of ram instead of the four mentioned. Also, the quadro won't be able to fit in the case that you linked. If you are going with an open box motherboard, you are running the risk of not getting an I/O plate nor extra SATA cables.

The case you have listed is M-ITX the mobo is M-ATX it whont fit inside.
Try selling that Quadro 6000 the price of them on ebay and amazon is ridiculously high (and its not a gameing card)

Ahhh yeah I'd really focus on selling that beast of a gpu - try ebay or something.
Chances are you'd kill it anyway with that included psu that comes with that case.
2nd hand Quadro 6000's sell for $500+ here in oz.. Amazon have new cards listed for >=$1000... You're sitting on gold.
Sorry if im negative but there is no way I'd pair such a beautiful workstation gpu with uber low end gear. Plus 4 sticks of ram wont be much chop as that board listed only has 2 slots.
If you sold the quadro even for $600 + $120 (your budget) - you've got yourself enough for a very nice build.
http://pcpartpicker.com/p/mpnvkL

save some more cash and you could get one of these entry level builds. They are more than fine for Minecraft and LoL.

Using a Quadro for gaming, especially one of that caliber is a complete and utter waste. A 120 USD build will be complete shit with or without that card, if you can get to around 500 USD, you can do much much better, even with an iGPU (like an AMD APU). Out of personal experience, I've planned and built 3 rigs on about a 1.2k budget, for budget CAD workstations, and they work beautifully. Not quite gaming beasts, but for the job they have been given they function fine.

Sell the Quadro or wait. It was a waste to purchase it in the first place, but sell the damn thing, and get either a lower end GPU, and more RAM, or upgrade the entire thing.

Slap it on ebay with no reserve it will soon go that card requires decent a power supply one that comes free with a chepo case is a fire fire hazard.

sounds like a good plan might do that. but if I don't do you think you could think up a $120 dollar pc?

It's already a stretch as it is. And throwing the workstation card into the build makes it even worse. A decent power supply to run the GPU will take up at LEAST half of your $120 budget...

Slap it on ebay with no reserve it will soon go that card requires decent a power supply one that comes free with a chepo case is a fire fire hazard.

With a 204W max power consumption? It probably won't even start.

Yeah, put it up on ebay, and sell it for either the price you got it for, or if it it was free, extremely marked down. I personally would have uses for it, but don't need it. You sound pretty young, so the relations you have probably don't have a use for it. The internet will.

this is not half of my budget http://www.tigerdirect.com/applications/SearchTools/item-details.asp?EdpNo=3843505&CatId=1079 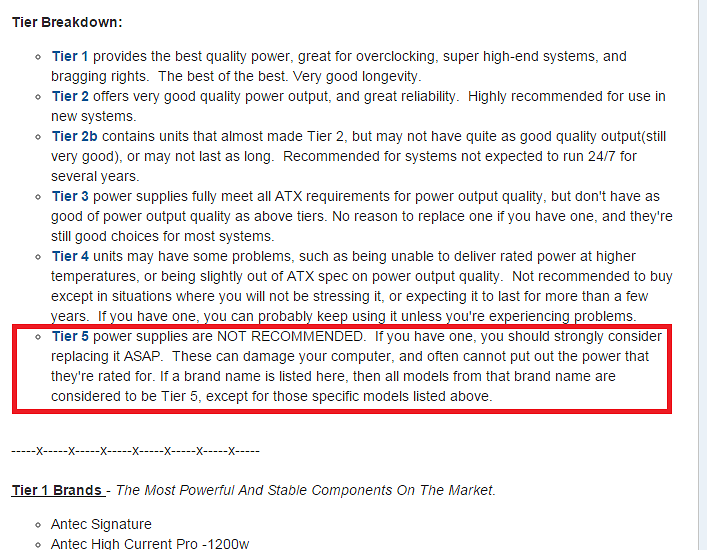 Here. this computer you can upgrade. http://pcpartpicker.com/p/ccmKK8
Worst case you run a motherboard on a table. this you can upgrade the ram and get a quadcore cpu later on for 80 bucks, also this mb supports overclocking so you can overclock the dual core.

Edit: Forgot to mention always run the latest performance driver. at the current moment this is the newest one: http://www.nvidia.com/download/driverResults.aspx/84049/en-us

Edit Edit: See if you can get a core 2 quad or cheep old intel stuff, like core2duo +

Go on the Buy/sell/trade part of the fourms and put it out there that you want a motherboard + cpu for like 80-100 bucks. you will be suprised at how many people have stuff laying around

My advice is to continue saving. With that case, ignore that 350w rating because they pulled out of their ass. The 12v rail is running at 12 amps, which means you have a 144W max at your disposal, and I wouldn't load those PSU's past 80%, which means you're looking at about 115W total power budget with that PSU. If you plan to use a HDD, you can toss 10W out the window. Another 10-20W for motherboard, and at this rate, all you have power for is a CPU. No GPU, no optical drive, no other storage. An APU is the only feasible way to game at this budget (both monetarily and power supply).

This is as cheap as I would go:
http://pcpartpicker.com/p/t2sNFT

I know it seems over budget, but all those components have free shipping, and factoring shipping on your current parts, the difference is about $7.50, not including taxes.

I would definitely try to sell your RAM and Quadro GPU to expand the budget. Maybe enough for a higher end PSU and GPU. If not, still try for faster RAM, at least 8GB dual-channel kit of 1866 and a higher end APU, like the A8. Should be enough to game at 720p.

Austin Evans has made a similar build for a $300 pc utilizing a an A6 dual-core APU. He covers Minecraft and League, and the APU he chose can handle those games at 1080p max settings