As mentioned before, Austria jumps on the broadband wagon with a budget of 25 billion €.

Although this money is going to be spent in all versions of infrastructure, this is the first real hope to get more then 10mbit Down and 2 mbit Up average coverage anywhere.

500 million of these 25 billion are going into research for other infrastructure like a special type of steel.
And many more millions are going into our streets, railways etc. too.

We get 1 billion € to fund broadband plans of municipalities all around Austria.
I don't expect FTTH for every house, but good LTE and FTTC coverage should definetly be a thing until 2020 (if they do as said).

We (all people that know something about IT in Austria) are definetly happy to see a reaction to the big need for better uplink speeds :) 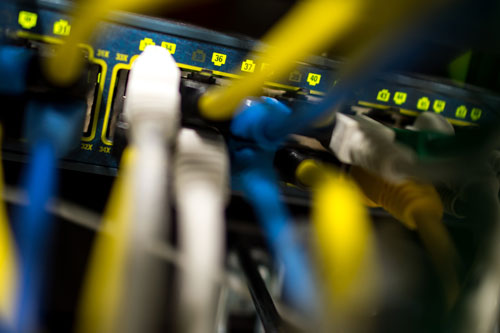 LTE imho still is no valid substitution for residential and/or commercial internet connection; Its a shared media and thus it will get worse over time, and the spectrum is already so cluttered that everything is fighting for airtime;

There has been broad band iniciatives in Lower Austra a view years back that A1 (former stat owned ISP/telco) carried out the work and cashed the money.. they put dark fiber (the actual tubing) into the soil even to small towns and villages but than... the money from the stat gvt was gone and they just left them there... no ftth or even outdoor DSLAMs for better ADSL coverage.
ADSL in my region? - pay for 30MBit/s down and 5MBit/s up - get 2,8MBit/s down and 0,8MBits/s up on average - that is the bs that makes me angry.

Maybe the can finish the fiber lines until 2020, would definetly help...

Still, tecnically consistand "lower" speed is better than highly fluctuating, burst transfere speeds. With overloading the air also latency is rising exponentially;
So if you rely on a stable connection you either have a dedicated, directed wireless connection (and hope noone builds in the line of sight) or you need a cable.

LTE is great, 50/25 when your allone; often messured burst transfers; but sustainably not reachable (usually.. in my experience). 10 consecutive messurements with my cellphone (LTE) never showed the same speed though I was not moving... of course 3am it was the fastest ;)

True, Fiber is the future but before getting nothing LTE is at least worth a try.

If you get yourself a good antenna and a router or modem for QoS you should even be good with LTE.

Two problems with that.. if the basestation has other QOS rules you can have on your site what ever you want. Your QOS prioritasation can only shape the traffic you generate but if the others on the network clutter the basestation up.. there is nothing you can do.
That's true for all shared media even Cable(TV) internet has that problem.

A better Antenna is just halve the deal; it depends on how strong your endpoint is sending; I do not know the maximum ratings for LTE, but if you get over the allwed mW your in legal trouble with the "Funkaufsicht".

LTE is ok for mobile usage, but all the webgate, webcubes and alike are just a desperiate try to fool customers into thinking that they have a reliable worthy home internet.

You can get in trouble for sending a too strong signal? great lol.

QoS in-home helps only in-home, that's logical. You can at least prioritise your PC's traffic, it helped me and my family a lot (and stopped us from being angry when someone drained the whole bandwidth :P)

I know that LTE is not the best answer, however copper isn't either ;)

QoS in-home helps only in-home, that's logical. You can at least prioritise your PC's traffic, it helped me and my family a lot (and stopped us from being angry when someone drained the whole bandwidth :P)

That is what it is for; but from your router outbound nobody cares about your QoS;

You can get in trouble for sending a too strong signal? great lol.

Shure! For every band (no mather what it is used for) the local authoreties define a maximum allowed power output; if you exceed that your entitled for severe financial punishment. For WLAN I know it is 100mW radiated from the antenna. So e.g. you have a accesspoint that is made to use a 1dBm antenna it will send the 100mW to it, but if you add a higher gain antenna like a yagi (directional antenna) that will likely have a gain of +24dBm so your exceeding the allowed output by a lot as dBm is logarithmic.

PM in UK said that by 2020 every household must have the right to have 10MBit/s connection. That's just pathetic.

I am always curious how old they are, and what internet they have at their palaces and offices. I think they have no idea, not even a little what they are talking about.

Until we start making use of particle entanglement(We haven't found a workaround for the physical limitations) the world needs to go fibre. Copper is just too expensive to get anything decent and LTE will always have latency and packet loss issues

And FTTH is the most future proof; the fibers themselves are capable of way more than the transcivers used.. so switching two components easely upgrades the burried infrastructure .

I'm just waiting for gigabit plans to start rolling out. Sitting on 200/200. All they need to do is flip a switch

I thought I read Australia but then I re-read it and it read Austria. :(. NBN for Australia please hurry the fk up.

I thought I read Australia but then I re-read it and it read Austria.

Small but important difference :P we do not have any kangaroos in the wild ... but we have alps ;)

That's what I would call an official 1st world problem lol

Please give me the alps cant stand the weird ass weather of Australia.

Sorry they are all mine :P