If you want to check out game compatibility with the games YOU play on Proton, try visiting protondb while being logged into Steam.

I switched to Linux on Sept 30th. By October 6th I broke my install. By October 9th I was Bourne Again (bash) and in love with Linux. I haven’t looked back.

I had a flashback the other day. . . Thought about this post. It has been a fun ride. 7yrs in the making

Been using Linux for… reasons (not my first rodeo, have daily-driven Debian-based distros a few times but never continuously for >4-6 months)

Am I still eligible to the badge if I somehow continue the rest of the year?

Definitely. What distro you thinking of installing?

So I’m new on the forum and gonna try again the 1year linux challange since last year I only did about 2 3months but was dual booting.
I’ve started already 2days ago on fedora 36 KDE spin hopefully will stay on linux for the long run with the steam pushing the gaming industry to make linux more compatible with gaming 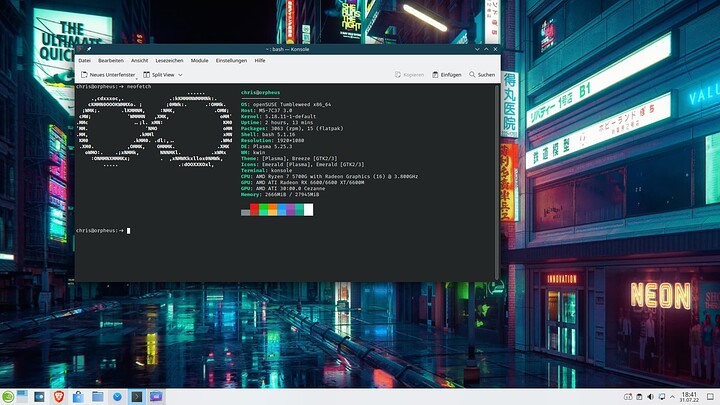 I’ve been on and off Linux on the desktop for over a dacade now and toyed around with a pi for quite some time. I would consider my self an advanced beginner. For gaming I’ve set up a virtual machine which runs Windows.

I think I misunderstood the challenge. 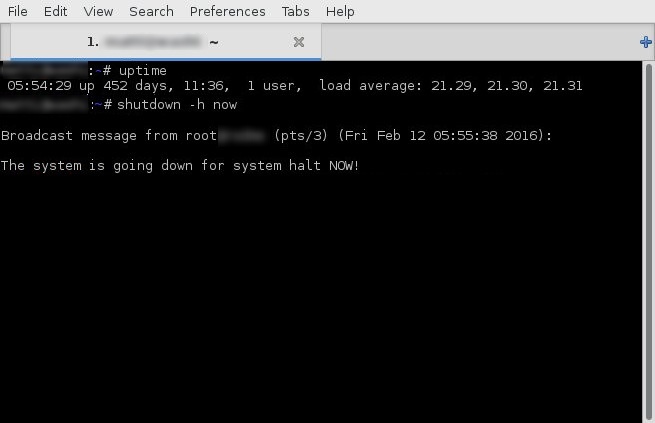 And a consistent load average of 21 also… Nice.

Putting that hardware to good use.

Nice. The only place I can get that kind of runtime is on my NAS… providing the power isn’t out for more than 10 minutes between recharges on the UPS.

Nice. The only place I can get that kind of runtime is on my NAS… providing the power isn’t out for more than 10 minutes between recharges on the UPS.

What’s really impressing is that was without a ups. Except for micro spikes we have very stable grid here.

It seems I also misunderstood the challenge. I have ecological habbit to turn off all electronics I don’t use that moment. Perhaps rpi3 fridge and freezer temp monitor project would be such a reason to let system run 24/7/365… Nah. Maybe I just put that Nas together and run it. My old router I just, replaced had quite good uptime. I just keep restarting it quarterly after updates. So not even that will have such uptime.

2006 I tried linux for first time and fully switched over some eight years ago.
Been a good ride!

Running Linux for 20 years. The last Windows os I ran was Windows 2000. then ran Mandrake 7.2, then migrated to Redhat 7.1 - 9.0(This is before the Fedora Project), then went to Gentoo Linux. took a break from computers for a number of years, Note, the home computer has always run a flavor of Linux. The Wife and I only run Linux on our systems.

Been a while since I posted, but I’ve had some interesting adventures distro-hopping in the last year or so. It’s been almost a year since I got a Framework laptop (11th gen) and it’s probably perfect for my use case.

Around when I got the laptop, I found and tried Guix for the first time. That was the first I had heard of NixOS or Guix or learned anything about them. I ended up running into some issues running Tailscale I believe, which is now a fundamental piece of my daily use, so that didn’t last long. I hadn’t wanted to move to NixOS since I have a general distaste for systemd. I love how Guix works technically but it doesn’t have the packages I need, and I could never figure out how to build my own.

After that I had the time to figure out Gentoo and used it for multiple months on my laptop and desktop. I still have a private git repo to track custom packages that were too slow for my liking or ones that didn’t exist at all. I appreciate that is as easy as it is on Gentoo. I like OpenRC, the main issues were constantly compiling updates every time I used either of my computers and I couldn’t find a from-source VSCode package that worked with any consistency.

In the meantime, I had an extra server that was running Xubuntu with some services. I converted that to use MicroOS Kubic - had some struggling figuring out the quirks of MicroOS specifically, but I built a script that detailed the configuration of kubeadm from scratch with all of the installed deployments. That was back and April, and I didn’t realize until a month ago that they completely sunset the Kubic project, and now it’s just MicroOS, so I have to figure out a migration plan now. Chances are I’ll just use MicroOS + k3s.

Since then I started using Ubuntu on my laptop. Ran with that for a little until the Firefox snap reinstalled itself over the firefox package and I temporarily lost all of my bookmarks and history. Man, fuck that.

I went to Fedora Silverblue briefly, and had similar issues with flatpaks… I trust Fedora more not to overwrite my installed packages, but I had trouble configuring Wayland properly for the VSCode and Lens. Package management was feeling perpetually like a chore. This may be more so of me being unfamiliar with Fedora - I don’t think I have ever used Fedora for a significant length of time. I do love an immutable OS though.

Recently, distro-hopping got even easier for me - I’ve kept most of my files in Syncthing, so that makes things easy, and I recently redid my yubikey+GPG+SSH set up following the One Key to Rule It All guide which was incredibly helpful. But now I don’t even have GPG or SSH keys to import, as they’re always on my yubikey. I just have to configure whatever distro I’m using to use GPG for SSH, which is slightly a pain but I don’t have to worry about copying my keys like I did before.

Which leads up to a week ago, when I installed NixOS. I haven’t had to interact with systemd at all (though I know it’s still there). Everything just works how I expect it to, and the system configuration syntax is easier than I expected. I may end up moving back to Guix though, it feels like a journey that hasn’t completed yet.

I’ve used linux on an older laptop since ~2018 (not exactly sure what date). In late (october or november) of 2021I swapped on my main pc, stuck with it ever since. ^^ Gaming + daily projects + anything else has been done on linux.

I believe you can install NixOS on OpenRC and s6 with custom scripts, but the systemd dependency will break the system for most of the scripts, so you have to do some wonky hackjobs and do exit 0 for systemd services or something, which I was not willing to do. NixOS was appealing to me and I’m willing to use it with systemd, but what I’m not willing to do is wipe my bootloaders (petitboot) for NixOS to work (it’s the first step in the HC4 guide).

But you can pick any base distro you want and just slap Nix package manager on it (using nix-shell). You base system can be anything, so you get kernel and bootloader updates from your base distro, but get all the programs installed and updated via nix-shell. I’d say one deadly combo is Alpine+Nix pkg manager, although it works just as well with Fedora or Debian. Alpine is small and gets out of the way, is super quick to update in general, while Nix offers you all the software package selection, which Alpine is lacking in its base repo.

For me, the appeal to NixOS came from this article that a member of the forum posted a while ago.
https://grahamc.com/blog/erase-your-darlings

It is pretty much what I’ve been doing with Alpine diskless installs, but on a whole other level.

Nice! I actually already moved back to Guix again

and I installed Nix for managing user applications, plus all the “nonfree” packages that Guix maintainers detest. Either way I’m building and keeping track of all these system configurations now which will make things a lot easier when moving around.

Thanks for the link! I wonder how I can adapt that with Guix, that post is inspiring.

It occurs to me that I haven’t posted in this thread. I ditched Windows on my main PC in favour of Kubuntu on 18th September, so nearly a month ago \o/ I installed Kubuntu (and later openSUSE) on an old laptop I have about a week earlier.

Sadly I can’t do much about my work laptop because it’s not mine and it has to run a prescribed set of software, but both devices I personally own run Linux.

Sadly I can’t do much about my work laptop because it’s not mine and it has to run a prescribed set of software, but both devices I personally own run Linux.

I have Live USB installs for several Linux distros. No impact on the installed OS and they have persistent storage for files. Works well when travelling and using hotel provided hardware.

I have Live USB installs for several Linux distros. No impact on the installed OS and they have persistent storage for files. Works well when travelling and using hotel provided hardware.

There’s not really a reason to do that. I’d have to boot back into Windows to use our database software anyway.

Haven’t kept up with this thread since first posting here and ditching Windows… checks date …4 and half years ago.

Tried Linux Mint for the first few years. Really newbie-friendly distro that made the transition easy for me. I still have it installed on my gaming PC. Nowadays I do most of my regular computing on a Libreboot Thinkpad running Debian. In terms of desktop environments, I started off on Cinnamon, then tried GNOME and KDE. The extra polish and pizzazz of Cinnamon made me go back to it though, even if it is a bit more resource-hungry.

Also switched from a generic off-the-shelf router to a custom pfSense box (thanks to the Level1Techs video!), and from there an OpenWRT solution. My smartphone went from stock Android to a custom ROM, along with a Pinephone on the side.

I still don’t really know the ins and outs of GNU/Linux as well as I’d like, and thanks to the ever-improving ease-of-use of all the different distros I’ve seen, I don’t really have to. If some issue pops up, the solution is usually online somewhere. So yeah… thank you to the free/libre software (and hardware!) community, thank you to the OP, and of course thank you to L1T