Where can I find a mod? Just curious.

Vmy bad for the late reply.

I've used linux as my goto for years, but I'd like to have my name on the board, so I'll use linux for another year I guess ;P

@polheim @nut the OP is editable by anyone, feel free to add yourself.

Hey 1 Year Linux Challengers! We thought about an idea. What we'd love to see is for everyone who's taken the 1 Year Linux Challenge and passed a year, or is close to doing so (Or if you've been using Linux for years and want to join in as well), is to make a new blog post and talk about your experience on Linux. (put it in the blog category and tag it with 1-year-linux, and link it here) The more detail the better! Tell us about the distro you used/are using. What hardware your using it on. How much your using it. What its replaced for you if anything. Challenges, problems, the good and bad. Tell us about how you got on, did you get help? How? Who helped, how did you solve your problems. Whats better on Linux than your other OS'. How has it changed over a year. Your favourite distro, favourite DE, favourite people, and things you've learned about Linux over your challenge. You get the idea, we want to know it all and the more detail the better! I'd love to see some thought and detail so that others can see how peoples experiences are with Linux. There may even be a little token of appreciation for those who've done the challenge and posted a nice thought out blog about it. And if your currently doing the challenge.. I'd encourage you to make a blog post and keep it up to date with your Linux adventure. (if you know one of the Linux challengers, pass this on to them. I don't want to mass message them all :P)

Gnarrrr... What does contemplation mean here. I read that at first as "completion" as in a wall for people who have done it. Thnx for the reply

I need my 2nd year chip :)
"Hello my name is Marten, I use to be a Windows addict but I have been clean for 2 years now."

Hello, my name is tkoham, and I have a problem.
I used MongoDB in Production

I have started with Ubuntu Matte 15.04 on my Laptop and Ubuntu Gnome 15.04 on my development workstation as of May 22, and as of today I installed Antegros (start my Archlinux Journey) on my spare box (testing machine).

Well not quite May 22, 2017 but after Ubuntu .... I went to Antergos...then to Manjaro XFCE...and now back to Antergos KDE. ~ 2 years and still loving this sobriety from Windows!

My brother-in-law asked to use a computer today. He only needed access to the internet, so I handed him my laptop - he's like "oooooohhhh Ubuntu - that's for people who really know what they're doing!"

Firstly, it made me feel super badass seeing as I put Ubuntu on this box because it's so damn simple - but it really made me also feel sad that people think Ubuntu is a complex Linux distro. People might be turned off to Linux because "ubuntu is for smart people." Man, Ubuntu is really the distro if you just want a desktop to work on.

Anyways, it's been somewhere like 3 years running various distros on differnt machines -- everything from Ubunut - Lubuntu - Fedora - CentOS - RHEL - Arch.

Rock on my fellow Linux people!

I'd like to be added to the list, I had a "test" run of Fedora on a USB drive starting somewhere in August-November of 2016 when my main workhorse was a Mac Pro. I liked the Mac Pro but the CPU did feel sluggish and it gobbled down 200 watts at idle. I decided to rebuild my gaming computer into a gaming/server/workhorse hybrid and reduced it down to the size of a Fractal Design Core 500. After the successful test run, I decided to go full-time Linux in February of 2017 but at the price of some data loss... It may have been a faulty USB port on the Mac Pro, but the data was encrypted and wasn't fully copied so that stung. Otherwise, Fedora has been a really great experience and I only switch over to Windows to play video games.

We have a number of Fedora users here, myself included.

Finally decided to add myself in. Been using Arch Linux almost 100% of the time (except Gaming and GameDev) since August '15. Here's the exact moment I switched: 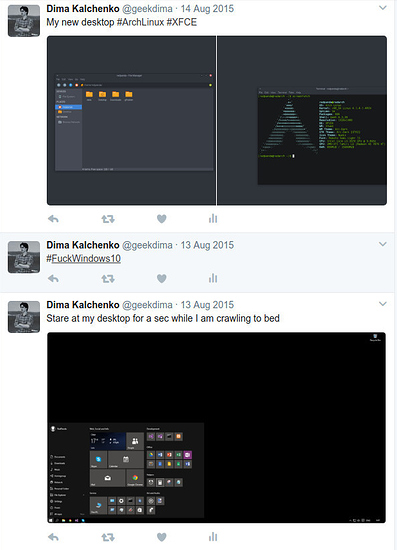 Installed Win10, removed all the spyware, wanted to go to bed, decided to also update it. It re-enabled all the spying stuff. I've been running Debian and Arch for some time in VMs. So with pure anger to guide me I slapped Arch on my hardware, and since then I changed my relationship status to married. (not really, I don't use social media 'cept Twitter)

Will update every so often
Started using Arch a year after windows 10 launched.

CHALLENGE COMPLETE
I am still having the same monitor issue (again) Arch Linux Crossover 289k not displaying desktop after login I was not able to solve the issue. I got annoyed manually resizing the windows, so I tried this afternoon (9/12/17) to make XFCE work. As I explained in my post in the post your desktop thread, https://forum.level1techs.com/t/official-post-your-desktop-mobile-screenshot-thread/74865/617?u=bedhedd

I got the appearance correct, but I couldn’t figure out how to rebind the caps key to super or how to pin items to the pannel.

In an desperate attempt to have a perfect taskbar, I signed back into Gnome(to see if the grass was greener on the other side). While browsing the extensions list, I decided to do a search on the list for “windows taskbar”, and found the extension Dash to panel which was the perfect solution.

I feel like I took a journey through the various Desktop environments. Started with Gnome, switched to budgie, tried to use XFCE and KDE, and now I am back with Gnome. I switched to Budgie, XFCE, and KDE as standins for Windows.

I thought budgie was the answer and I should wait for window tiling, boy was I wrong. Annoyed with the wierd issue Arch Linux Crossover 289k not displaying desktop after login I decided to try XFCE to see if it would solve my issue. It did not, and I spent an afternoon tweaking XFCE to have a task bar the same as Windows. I got the appearance correct, but I couldn’t figure out how to rebind the caps key to super or how to pin items to the pannel.

So… after wandering around the various DEs I ended up in with the same one I started from. I guess this went full circle. I now have a four corner tiling with shell tile and a perfect taskbar with Dash to panel. My desktop finally feels complete. 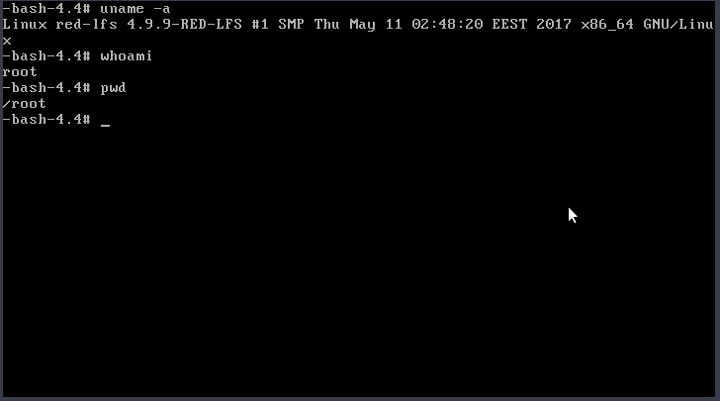 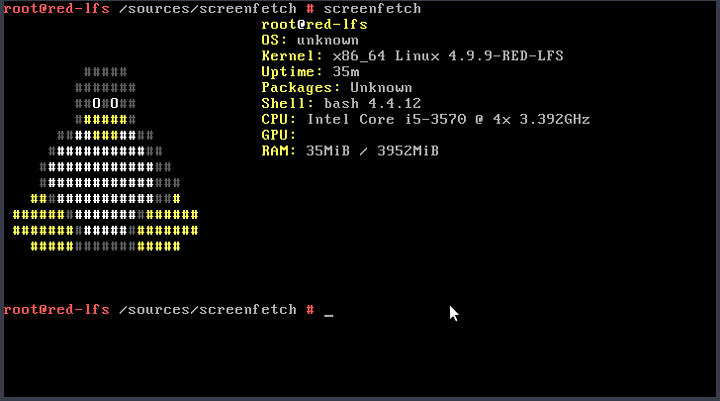 Is there an 8 year challenge? I have always loved Linux and spent a lot if time going to LUG meetings and such. I run an IT services company and since 2003 my back end servers have run Linux or BSD. I made a decision to move my desktop to Linux in 2008 and later my staff desktops over to Linux. I don't really play much in the way of games and being that the workstations we use are for supporting Windows users we still fire up Windows in a VM from time to time. One of the bigger challenges was starting my YouTube channel a few years back running Linux. The software really buggy and I had to do some furious clicking on that save button not to lose my mind. In the past year, I have been editing using Kdenlive and it has matured into a very stable product and with so many things being web apps, running open source in 2017 has become really easy.

Well I am going to add myself to the challenge since I started using Linux as my daily driver for work about 2 months ago (helps that I am a sys admin and HAVE to use it daily)
My distro of choice though is one I don't see a lot of people here using - Solus OS www.solus-project.com
Not only am I in love with Solus OS, but everyday that goes by I want to run further from Windows faster and faster.
I don't know if I have ever run a more stable and beautiful OS ever. It runs well on my XPS 13, on my Xeon desktop(Precision T3600) and on my i7-7700 Precision.
The only thing keeping Linux off my home machine for now is my hardware's lack of IOMMU pass-through support (i7-4770k doesnt support VT-d)
Also it has been fun learning eeopkg and using it instead of apt-get or yum. Makes for some challenge if software has not been already packaged for Solus, but I have been able to find amazing alternatives for everything I need to do.
I can't recommend Solus enough, especially for new users. It just works and it works well. There is good software easily accessible through a very well organized software center and there is a growing and very decent community around Solus.
I have to say I'm thankful that I was pushed into using Linux as my daily driver due to work, because it really doesn't do it justice when you just trow linux on a spare old PC and dick around with it occasionally. You really do need to dive in head first and make mistakes, break stuff, struggle through forums, etc and really learn what it can do for you. I don't ever see myself going back to full-time Windows user.
I also have to say that Level 1 Techs, Wendell and everyone here on the forums have made the transition an easy no-brainer for me. Thank you to all who are encouraging and supportive of Linux as an OS.
So I officially started this journey April 10, 2017... lets see where I am in another 10 months. I look forward to updating you all and giving my review of 1 year on Linux.

I've heard the Solus project needs help with funding recently. But I hear it's a good shell

Solus is a really nice distro, we did a review of it a while back on the Sunday Morning http://smlr.us/?p=4882 There are a lot of good choices for Linux Distros which makes switching fun, but can be confusing for people coming from Windows to choose, or even understand all the options.